Teruo (YosiYosi Arakawa), a self-conscious nerd and the oldest son of a used bookstore owner, cares more about playing pranks on strangers and videotaping their reactions than anything - even eating.

His dream is to build the world’s scariest haunted house.

His best friend and sometimes collaborator is Hisanobu (Yoshinori Okada), a kind and diligent hospital administrator.

However, when Akari (Yoshino Kimura), a clumsy but beautiful artist, starts work at the bookstore, Hisanobu and Teruo both fall for her. The film won the Audience Award at the New York Asian Film Festival.

How To Train Your Dragon (All) 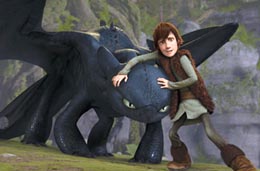 Based on the book by Cressida Cowell, this animated film tells the story of a Viking teenager named Hiccup (Jay Baruchel) who lives in the Island of Berk, where the fights between burly Vikings and wild dragons never end. As the son of Viking leader Stoik (Gerard Butler), Hiccup wants to join the fight and hunt the dragons, though he doesn’t really fit the bill. But when he ventures into battle and encounters an injured dragon, Toothless, the clumsy, yet inventive boy’s world begins to turn upside down.

As Hiccup secretly takes care of the dragon, the two become friends and Hiccup learns that he and the other Vikings have misjudged the species. But even as the two each take flight in their own way, they find that they must come together to fight the destructive ignorance plaguing their world.

As the World Cup gets started in 2002, a North Korean squad commander (Lee Seong-jae) stationed at the DMZ who is crazy about football is frustrated that he cannot participate in the excitement in the South. He loves football so much that he even memorizes all the names of the members of the South Korean national team.

One night during a search operation in which the leader and his troops chase a boar to satisfy their hunger, they come face to face with soldiers from South Korea. It doesn’t take long for the soldiers to discover that they share a love of football and they begin secret radio communications so they can listen to matches together. When their secret is uncovered, the squad leader and his troops must find a way out of the situation.

Mama and Papa (All)

After Min-cheol (Jo Dong-hee) borrows money from a loan shark to pay for his pregnant wife’s hospital bills, he is unable to pay the loan back and ends up leaving his wife and three children. This leaves his wife alone to be hounded by the loan shark and his henchmen, which aggravates the chronic disease that she had been suffering and she eventually succumbs to death.

When Min-cheol finds out what has happened, he comes back and is stabbed to death after engaging in a fight with the loan shark and his gang.

As a result, two of Min-cheol’s daughters are sent to an orphanage while the oldest daughter Ji-yeong (Kim Jin-ah) is sent to live with her uncle (Kim Gook-hyeon) and his family. Ji-yeong is forced by her uncle to work at a sewing factory, without knowing that her uncle has already taken her salary and fled. Not to be discouraged, Ji-yeong works hard to reunite with her younger sisters, writing her memoirs to overcome her pain. Her life changes when one day a famous actor (Kim Ho-yeong) finds out about her story and helps her tell it to the world.

A Nightmare On Elm Street (18) 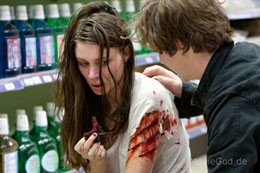 A re-imagining of the tale of horror icon Freddy Krueger, this film depicts a serial killer who kills people in their dreams, causing them to die in real life.

While at a diner with his girlfriend, Dean Russell (Kellan Lutz) falls asleep at the table. In his dream, a guy with a burned face who is wearing a clawed glove on his hand appears and cuts Dean’s throat. But in reality, it is Dean who is cutting his own throat, as his girlfriend Kris Fowles (Katie Cassidy) and the waitress Nancy Holbrook (Rooney Mara) watch. Soon after Dean’s funeral, Kris also begins to dream about the man, so she asks her ex-boyfriend Jesse Braun (Thomas Dekker) to stay at her house while she sleeps. But she is also attacked in her dreams and murdered. Jesse rushes to Nancy’s house to explain what happened to Kris but figures out that Nancy has been also dreaming about the same man, whose name is Freddy Krueger (Jackie Earle Haley).