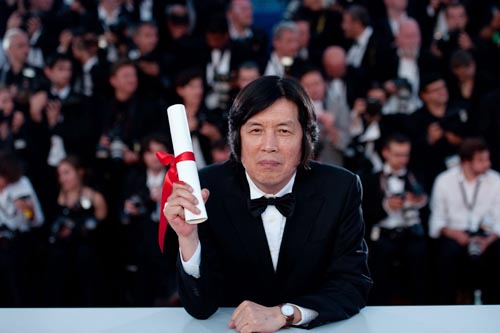 
Novelist-turned-director Lee Chang-dong’s screenplay for “Poetry” received zero points from the Korean Film Council when he submitted his application for funding from the government-supported council last year. The council said the reason for the low score was that the screenplay was written like a novel, not a screenplay.

The unconventional format may not have been acceptable to the council, but it did impress the jury at this year’s Cannes Film Festival, where it picked up the award for best screenplay on Sunday (local time). With that, Lee has become the first Korean to earn the best screenplay award at Cannes.

“We anticipated the possibility that the film could win an award, but nobody knew until the big day,” said Song Ki-hyun, a spokeswoman for the film’s public relations team.

“Director Lee was spending time in Paris on his own, but on Sunday morning the festival organizer called and asked him to appear at the closing ceremony. He and the other actors will probably have a press conference this Wednesday or Thursday in Korea after they fly home,” Song added.

Poetry received rave reviews from critics and the foreign press for mixing two starkly different topics - poetry and rape - into a single film.

Through this film, Lee said in a press conference held last month that he wanted to “give people a chance to think about beautiful things that are forgotten.”

Winning the best screenplay award is a great achievement for Lee, but it is not the first time his work has been recognized at Cannes. In 2007, Lee’s “Secret Sunshine” brought the best actress award to actress Jeon Do-yeon. In 2009, Lee was invited to be on the feature films jury at that year’s festival.

Although Lee has become influential at Cannes, he says that filmmaking is always challenging for him.

“Whenever I make a new film, I always ask the same question of myself: ‘Is this going to be a hit?’ But if the truth of the film is conveyed to moviegoers, I believe that I can share the things that I want to say with the audience,” Lee said.

When asked last month about his chances of winning at Cannes, he said, “I’m just waiting, and it’s better for me to keep a low profile before the festival. “But I feel comfortable because a handful of people around me who have had a sneak peek of the film have told me that this one is less uncomfortable than my previous films,” he said with a laugh.

Unlike other directors who started their careers when they were in college, Lee made his first full-length film, “Green Fish” (1997), when he was 43. Before he stepped into the film industry, he wrote novels. Before that, he taught Korean literature in a high school.

Lee got a late start, but his films, including “Peppermint Candy” (1999) and “Oasis” (2002), have won critical acclaim for their honest portrayal of difficult issues in Korean society.

This year’s Cannes Film Festival was something of a showcase for the nation’s film industry. Four Korean films were invited to the festival this year. Lee’s Poetry and Im Sang-soo’s “The Housemaid” competed for the Grand Prix, while Hong Sang-soo’s “Ha Ha Ha” earned the top prize in Un Certain Regard, a sidebar competition. Hong has been invited to Cannes six times, including this year, but this is his first award. Jang Cheol-soo’s horror flick “Bedevilled” was also screened at Critics Week, another side event.

Meanwhile, at the Cannes film market the copyright to the Korean war film “71 - Into the Fire” was sold to four countries: Germany, England, Singapore and Russia. It will be released in Korea on June 17 at theaters nationwide.