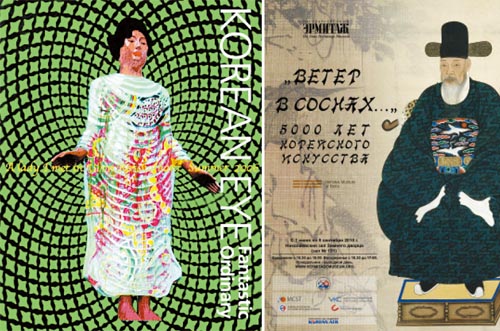 
Korean art both old and new is going on the road this summer, as the Saatchi Gallery in London heads into its second year of exhibiting contemporary Korean works, and the State Hermitage Museum in St. Petersburg, Russia, puts together a display of ancient relics.

“Korean Eye,” a project founded last year by David Ciclitira designed to introduce contemporary Korean artists internationally, will hold its second exhibition at the Saatchi, one of Britain’s most renowned art galleries, from July 3 to 18. The exhibit, sponsored by Standard Chartered First Bank Korea and titled “Korean Eye: Fantastic Ordinary,” will move on to Singapore from Sept. 24 to Oct. 10 and return to Seoul in November. The show features works by 12 contemporary Korean artists. SC First Director Tim Miller said his company was overjoyed with the 250,000 visitors drawn to last year’s exhibition, “Korean Eye: Moon Generation,” and is more than happy to sponsor the exhibit again. “This year’s art shows diversified talent and a high level of expressive techniques. I have great expectations for its success, and I’m so pleased to be able to sponsor these very talented Korean contemporary artists,” Miller said in a press release.

While Londoners enjoy Korean contemporary art, Russians will have the chance to immerse themselves in traditional Korean culture as the State Hermitage Museum in St. Petersburg displays up to 354 artifacts on loan from the National Museum of Korea to celebrate 20 years of Korea-Russia diplomatic relations.

Back in 1991, the Korean museum held an exhibition titled, “The Scythian Gold,” which included some 230 pieces of Russian nomadic artwork. This year, Korea will reciprocate.

The two directors of the museums, Mikhail Borisovich Piotrovsky and Cheo Kwang-shik, closed the deal for the exhibition earlier this year, deciding to hold a 97-day event “to introduce the quality and originality of Korean culture,” according to a press release.

“Wind in the Pines: 5,000 Years of Korean Art” will open June 1 with a special ceremony and last until Sept. 5. The exhibition is also aimed at raising awareness of Korean culture among Russians. Among the 354 Korean artifacts, two National Treasures and 10 other treasures will be on display, marking perhaps the most important display of Korean relics in Russian history. The museum’s largest room, the Nicholas Hall, is scheduled to be set aside for the event.