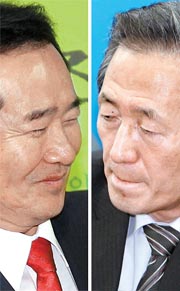 And although incumbent Seoul Mayor Oh Se-hoon of the GNP was re-elected over his Democratic Party rival, his razor-thin victory only confirmed the rise of the Democrats’ popularity and could be an augur of the next national election. The Seoul mayoralty is seen as a stepping stone to the presidency.

The Democrats won seven top posts in Incheon, Gwangju, Gangwon, North and South Chungcheong and North and South Jeolla out of the 16 metropolitan city mayor and provincial governor elections that were held Wednesday. 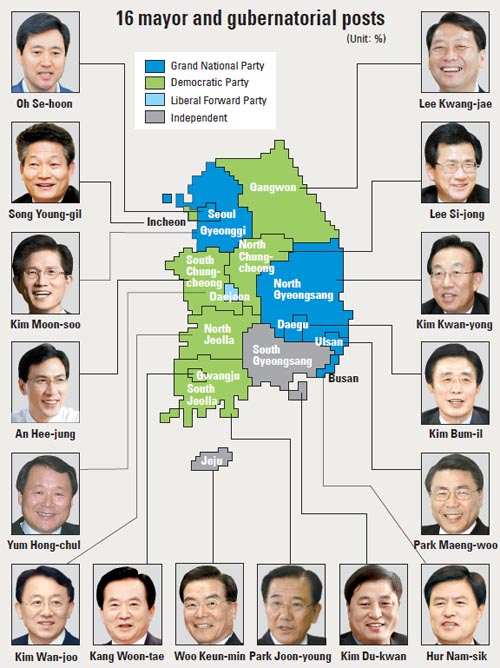 Although the GNP triumphed in two of the three strategic races in the capital region, it surrendered its traditional stronghold of South Gyeongsang and Gangwon to liberals. The GNP also lost in Daejeon and the Chungcheong provinces, presenting a serious challenge to Lee’s plan to downgrade the redevelopment of Sejong City from a new administrative city to a mere business hub.

In the aftermath of the defeat, GNP chairman Chung Mong-joon and Lee’s chief of staff Chung Chung-kil resigned to take responsibility.

Perhaps the most watched election was the battle between Oh and Han Myeong-sook in Seoul. The exit polls indicated a near-tie between the two. Oh’s victory was only confirmed at 8:25 a.m. yesterday as ballots from Seocho District, a GNP stronghold, were tallied.

Oh defeated his Democratic Party rival by about 26,000 votes. Oh won 47.43 percent of the ballots while Han received 46.83 percent.

While Oh struggled against Han in Seoul, Gyeonggi Governor Kim Moon-soo of the GNP enjoyed an easier, but still close, triumph over Rhyu Si-min of the People’s Participation Party. Kim won 52.2 percent of votes, while Rhyu, who represented the allied opposition candidates including the DP, scored 47.8 percent.

In Incheon, another key strategic area of the capital region, the incumbent mayor Ahn Sang-soo of the GNP suffered a defeat. Song Young-gil of the Democratic Party was elected with 52.69 percent of votes. 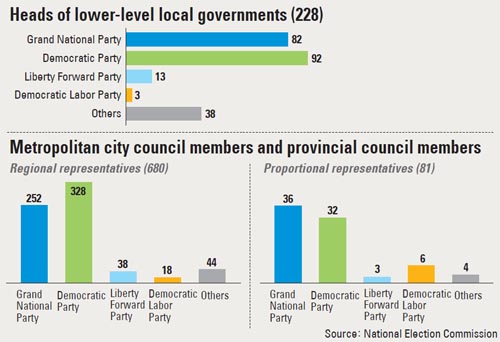 The Democrats’ dominance was also clear in the elections of 228 county governors. While the Democrats won 92, the Grand Nationals secured 82. Independents and candidates from other minor parties won 38, the Liberty Forward Party won 13 and the Democratic Labor Party won three.

The Democrats particularly trounced the GNP in the district head elections in Seoul, winning 21 out of 25 posts, a dramatic change from four years ago. In the last local elections, the GNP won all 25 district head posts.

Democrats were also able to celebrate a near-sweep of the Seoul city council in an almost total reverse of the last elections. Democratic candidates took 74 of the 96 available seats, to the ruling party’s 22.

The Grand National party was in damage control mode yesterday and the idea of scheduling a convention to elect a new chairman was discussed.

Blue House Chief of Staff Chung’s resignation is expected to be accepted, prompting speculation that a reshuffle will also follow to revamp the administration.

“The election outcome should be received as an opportunity for self-examination,” President Lee was quoted as saying by spokeswoman Kim Eun-hye.

“The government must concentrate all efforts on further economic recovery.”

“The election defeat has created a serious setback for Lee’s agenda for the second half of his term,” said a senior Blue House official. “The four major rivers restoration project is currently ongoing, so it wouldn’t be disturbed, but the plan to revise the Sejong City development program effectively becomes impossible.”

Chung also demanded that the four rivers project be scrapped and Lee give up his Sejong City revision plan. He also urged Lee to apologize for creating a national security crisis in the aftermath of the Cheonan’s sinking.

The elections also signaled the return of the late former President Roh Moo-hyun’s people, despite the losses by Han and Rhyu, key Roh aides, in Seoul and Gyeonggi elections. Victories by three key Roh aides also hinted that the regionalism that has dominated Korean politics for decades may be dissipating.

The Democratic Party won elections in not only its traditional strongholds of Gwangju and the Jeolla provinces, but also in the GNP strongholds of Gangwon and South Gyeongsang and Liberty Forward Party strongholds South and North Chungcheong provinces.