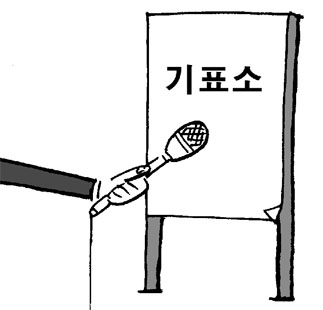 Election polls have been full of fallacies even from the beginning. The U.S. presidential election in 1824 was a match between John Quincy Adams and Andrew Jackson. The Harrisburg Pennsylvanian newspaper collected the opinions of the public and predicted a victory for Jackson. However, it was Adams who was elected. The sample group was too small.

In the 1936 presidential election, the Literary Digest sent 10 million questionnaires on the popular vote and got 2.3 million back. The magazine predicted that the Republican Alf Landon was likely to win a crushing victory over Franklin Roosevelt. In the real election, Roosevelt got a whopping 61 percent of the votes and was re-elected. This time it was not the quantity of the sample group but the status that threw off the poll. The magazine used lists of phone subscribers and car owners, and these people were in the middle class, which supported the Republican Party.

In the meantime, George Gallup made a name for himself with his sampling techniques. He used smaller samples, but his proved more reliable since he predicted Roosevelt’s victory. Still, even Gallup could not predict that Harry Truman would win the 1948 election.

Though advanced survey techniques have developed they are still not always correct. For each incorrect poll, pollsters make excuses. The German social scientist Elisabeth Noelle-Neumann invented the theory of the “spiral of silence.” When one thinks his opinion is dominant he raises his voice, but he is likely to remain silent if he regards his opinion as the minority. This leads to a so-called “hidden vote.”

The Bradley effect is another such theory. In the 1982 election for the governor of California, the opinion polls forecast that the African-American candidate Tom Bradley of the Democratic Party would defeat his white rival. But the result was the opposite. Voters gave false answers to the polls in fear of appearing racist. In the 2008 presidential election, people wanted to see if Barack Obama could counter the Bradley effect.

Would it be possible to make perfect forecasts if all the voters are surveyed? Probably not. Many seem to change their minds even several times a day. Robert Feldman, the American professor of behaviorism, found out that one lies to a new acquaintance about three times in the course of 10 minutes.

The opinion polls leading up to this week’s local elections have been criticized. The political community said the results were unexpected, but that only reveals that politicians were complacent. Pollsters blame hidden votes and the “mobile effect,” but it only shows that they were incompetent. Didn’t politicians count on the bandwagon effect, a phenomenon in which people chose the favorites just because others support him or her, or the underdog effect, seeking pity votes? Effects of this type can’t sway the public so easily.