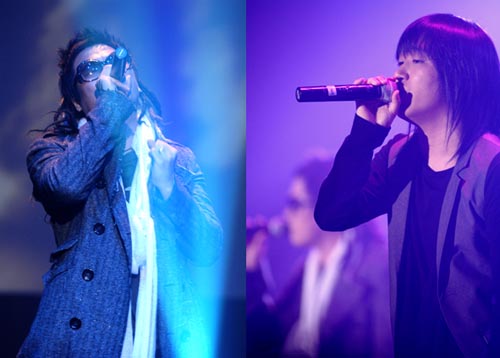 TO KNOW, TO LOVE

June 18: The Dukyoung Organization is holding a concert in honor of Korea’s multicultural community. The Dukyoung Trio, which consists of only percussionists, will perform Dvorak’s “Dumdy” Piano Trio No. 4 in E minor, Op. 90. The Ensemble Rhythmico offers “Holy Mozart” and “Mozart at the Opera.” And the Rainbow Korea Chorus will sing traditional Korean songs.

June 18 to 19: The popular Korean R&B duo Vibe is holding a promotional concert for their fourth album “Vibe in Praha.” The duo will perform the songs on the new album and past hits.

June 24: Dmitri Berlinsky, a violinist and a professor in the music department of Michigan State University, will hold a concert with pianist Boris Slutsky and Lee Jung-wha, his student who teaches at the Peabody Conservatory of Music. They will play Beethoven’s Sonata No. 5 “Spring”; Prokofiev’s Sonata No. 2 in D major, Op. 94a; Ravel’s “Tzigane” and more.

June 26: This vocal performance celebrates the 200th anniversary of the birth of German composer Robert Schumann. It will feature songs inspired by the love story between the composer and his wife, the pianist Clara Wieck. Soprano Jang Hyung-joo, a professor at Yonsei University, and award-winning tenor Kim Sae-il will also appear.

June 26: Five popular indie bands come together for this warm-up concert for the Jisan Valley Rock Festival in July. The Moonshiners, Art of Parties, Guckkasten, Galaxy Express and Crying Nut will perform.

Crying Nut, a punk rock band, set a new record for number of CDs sold with their self-titled debut album in 1998. They’ve remained popular over the years and celebrated their 15th year as a band this past April.

The Moonshiners, another popular punk band, specializes in their own brand of tongue-in-cheek, in-your-face anthems. The band is fronted by Cha Seung-wu, who has gained attention in recent years for his roles in the films “Go Go 70s” and “Radio Dayz.”

To Sunday: Yae-sung and Sung-min, members of the Korean idol group Super Junior, are making forays into the musical theater world with their performance as the Korean hero Hong Gil-dong, a fictional character similar to England’s Robin Hood.

This musical will be performed with traditional Korean music and an orchestra.

“Hong Gil-dong,” which is hosted by Jangseong County and produced by the Seoul Philharmonic Orchestra, is gaining attention as the first musical in Korea produced through a public-private partnership.

THE PIRATES OF PENZANCE

June 19 to 20: The nonprofit Camarata Music Company presents the Gilbert and Sullivan classic comedic musical about a romance between a pirate and a major general’s daughter.

Proceeds from the performance will support the company’s music lessons in Seoul orphanages and low-income centers.

Seoul National University of Education Station, line No. 2 or 3

June 23 to 27: The opera is a representative masterpiece of Italian opera buffa. It is a story of conspiracy, artifice and romance, which are plotted around the beautiful prima donna Norina, the wicked and old Pasquale and wise physician Malatesta.

June 25 to July 6: Based on the 1986 film starring Robert De Niro and Jeremy Irons, “The Mission” transforms the story of 18th-century South America into a musical. Ennio Morricone, the music director for the film, played a large role in transforming the screen version into a musical. The musical will feature six new songs that were not in the movie.

This adaptation combines the basic story of Macbeth with Cho-In’s unique blend of traditional and contemporary movement styles to explore universal themes of greed, ambition and war.

The National Folk Museum of Korea

Performances start at 3 p.m. and are free with admission to Gyeongbok Palace.

June 17: This concert features young artists who have been instrumental in linking the past with present and guiding the future of traditional Korean music. They will play traditional Korean instruments such as the daegeum (bamboo flute), haegeum (Korean fiddle) and ajaeng (Korean zither).

The Korea-Greece World Cup match will be shown on a large screen in Nakseongdae Park on June 12 at 8:30 p.m.

Sunday to July 5: The Daegu International Musical Festival is the only international musical festival in Korea.

Festivalgoers can attend musicals from all over the world including “Academy” from the United States, “Anjou: A Tale of Horror” from Mexico and “The Sapphires” from Australia.

In addition to the performances, there will be special backstage tours, workshops and an exhibit of the world’s best musical memorabilia.

To get there from Seoul, take a bus or KTX train headed to Daegu.

Sunday to 20: In Korea, fireflies are only indigenous to the Namdaecheon Stream in Muju. The Muju Firefly Festival is an eco-friendly event that celebrates not only these fascinating creatures, but also the area’s natural environment and folklore.

Visitors can enjoy a program of firefly-themed events as well as learn more about the important connection between nature and the agrarian way of life in this beautiful mountain area.

From Seoul Nambu Bus Terminal, line No. 3, take a bus for Muju.