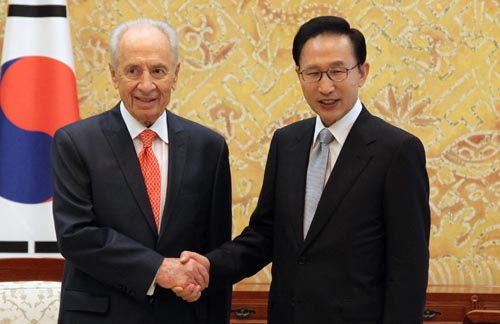 Lee told Peres that, “Both of the countries have responsibility to make efforts for the co-prosperity of mankind through peace and stability,” according to Lee’s spokesman Park Sun-kyoo.

Park said the leaders did not directly mention the flotilla incident during their 45-minute one-on-one talk, but the South Korean president’s comments were an indirect expression of his opinion about it.

The South Korean government sought to keep a low profile on the Israeli president’s four-day trip here, which began Tuesday, apparently in consideration of the international community’s condemnation of the attack which killed nine Turkish activists. Israel has claimed it was a self-defense measure.

The Blue House did not issue any press release on Peres’ “official working visit” without a formal welcoming ceremony until after his summit talks with Lee, including their joint press conference.

South Korea’s diplomats also worried that Peres’ trip may have a negative effect on Seoul’s efforts at the United Nations to punish North Korea for its apparent torpedo attack on a South Korean warship, the Cheonan, in March. The attack left 46 sailors dead.

With regard to the Cheonan incident, Peres said he carefully read the report by a multinational probe team pinpointing North Korea as the culprit, the spokesman said.

“I have no doubt that North Korea is responsible. I have the same position as South Korea,” Peres was quoted as saying.

Peres, who won the 1994 Nobel Peace Prize for producing a historic peace deal with Palestine a year earlier, stressed that Israel and South Korea have much in common, especially in that South Korea went through Japanese colonization from 1910-1945 and Israeli people had the experience of living without a homeland.

Meanwhile, the Blue House announced yesterday that Turkish President Abdullah Gul will visit Korea next Monday through Wednesday. During a summit on Tuesday, Lee and his Turkish counterpart will discuss bilateral issues as well as international cooperation ahead of the Group of 20 Summit.