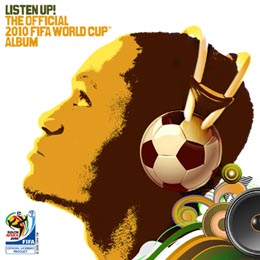 The World Cup is the world’s biggest party, and a party isn’t a party without music. It’s especially heartening that the official 2010 FIFA World Cup album has such a strong African undertone.

The main anthem for the World Cup, “Sign of a Victory,” is sung by R. Kelly and is inspirational, in the vein of his previous hit “I Believe I Can Fly.” The official World Cup song, “Waka Waka,” sung by Shakira featuring Freshlyground, is a wonderful cheering song. As one of the artists representing Asia, Korea’s 2AM contributes, “No. 1,” a competitive ballad built on an electronic foundation.

“Listen Up!” is everything you would expect from a commemorative sporting event CD. It will certainly get you in the mood to support your team, but you probably won’t listen to it again after the excitement is over. The African flavor does brighten up some of the tracks. The album lives up to expectations - nothing more and nothing less.