145 moments in history at exhibit of Pulitzer winners

145 moments in history at exhibit of Pulitzer winners 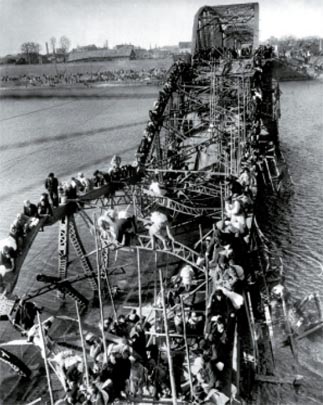 Max Desfor, an American photographer, took a picture of the Daedong River railway bridge while he was reporting on the Korean War. Men, women and children dangle from the half-collapsed structure. These are the grandparents and parents of today’s young Koreans.

As the United States-Republic of Korea joint forces proceeded north to the Yalu River, Chinese Army forces united with the North Koreans on Nov. 25, 1950. The U.S.-ROK troops had to fall back after a few weeks of struggling, and blew up the Daedong River railway bridge to prevent the Chinese and North Koreans from pursuing them on their way back south.

To the citizens of Pyongyang, staying in the city seemed like suicide. They had no choice but to scramble over the broken bridge and try to flee.

With this photo for the Associated Press, Max Desfor won the Pulitzer Prize.

His photo is one of 145 Pulitzer-winning works that will go on display at the Seoul Arts Center in Seocho-dong from June 22 to Aug. 29 at an event called “Capture the Moment.”

The first Pulitzer for photojournalism was awarded in 1942, and the category was split in two, breaking news photography and feature photography, in 1968.

Ever since those two categories were established, prize-winning photos have recorded important, fleeting moments of human history. Suddenly the entire human race was able to experience, at least by photographic proxy, what was happening to their brothers and sisters halfway across the world.

Carol Guzy, who won the Pulitzer Prize three times, compared photojournalists to missionaries who risk their lives far away from home.

Michael Macor, who won the prize in 1990, said he recorded history by instinct and simply tried to do his best.

The exhibit is meant as a tribute to these brave men and women, and as a chance for visitors to appreciate defining moments in history from 1942 to the present day.

Each photo is accompanied by a caption explaining when and where it was taken, along with a brief quote with the photographer, recalling the moment and giving the viewer a chance to return in spirit with them into human memory. Desfor is reportedly coming to Korea to see the exhibition.