Experience life in a Korean hanok

Experience life in a Korean hanok

Two Japanese tourists, on the right, make makgeolli, as part of one of the cultural programs available at the Tea Guesthouse in Seoul. By Kwen Hyek-jae

Although it is difficult to buy a hanok, a traditional Korean house, in Seoul, one can certainly live in one for a day. Last month, the Jongno District Office began receiving applications from the owners of hanok in Gahoe-dong, Wonseo-dong and other neighborhoods in the district who want to be part of the district’s new Hanok Experience program. Guests at participating hanok will not only get a closer look at the physical structure of one of these elegant houses, but can also have the experience of staying in one.

Currently, 25 hanok are part of the Hanok Experience program, but the number is increasing, the district office said. The programs vary - some hanok function as a bed-and-breakfast, while others offer cultural activities, such as classes in making kimchi.

This guesthouse has been open for four years. On the day we visited the site, we met two Japanese women in hanbok, or traditional Korean clothing, stirring bowls of fragrant makgeolli. They had signed up for the hanok’s makgeolli-making program and were immersed in brewing the traditional Korean rice wine. Emiko Miyano, 36, said, “In Japan, making liquor at home is banned, so the makgeolli-making program was particularly appealing.”

Tea Guesthouse, one of the most well-known hanok guesthouses in Seoul, has seven rooms. There are four six square-meter single rooms, which can be rented for 50,000 won, two 10 square-meter double rooms, which cost 80,000 won, and one special room, which costs 160,000 won. The special room has a separate bathroom, while the single and double rooms share three bathrooms between them. The guesthouse also provides a Korean or American-style breakfast.

This year, the guesthouse began offering cultural programs, including classes in making makgeolli, which cost 120,000 won, and kimchi, which cost 90,000 won. To complete the experience, guests can rent hanbok to wear during their stay. 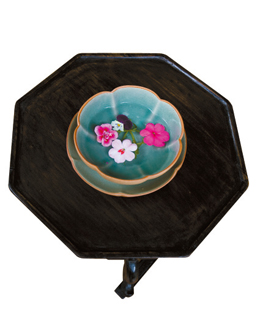 A corner of Tea Guesthouse.

Eugene House has a spacious courtyard in the center of the building.

There are small rooms for two people and larger rooms that can accommodate up to six people. All rooms are accessible from the courtyard via double doors that are designed to block the cold during the winter.

The owner of Eugene House, Kim Yeong-yeon, who has taught Korean culture in Japan and China, named the house after her daughter. Kim said that she “enjoys seeing her visitors get so much enjoyment from staying” there.

On weekends, Eugene House mostly caters to Koreans from the provinces, while on weekdays it takes in more foreigners. 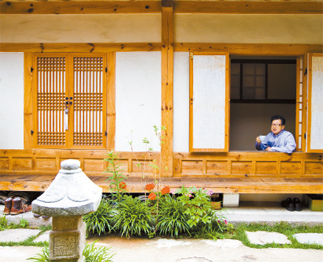 A tourist from Japan takes a moment to enjoy the view at the Tea Guesthouse.

This is a small hanok with four rooms. The room rate is 50,000 won each, and breakfast is included.

The leader of Bukchon Music Group, Kim Jung-jin, offers lessons on traditional Korean instruments such as gayageum, a kind of zither, and janggu, a kind of drum. The group also offers concerts for guests.

The decor in this hanok is eclectic and consists of traditional Korean furniture that blends in beautifully with the more modern pieces. The rooms have a cafe feel, and the hanok sells snacks, drinks and liquor just as a cafe would. Snacks and drinks range from 2,000 to 5,000 won.

There are two rooms available for rent for 55,000 won each, including breakfast. Wireless Internet access is available in both rooms.

The guesthouse owner, Na Jung-won, was once a journalist who dreamed of owning a hanok cafe. Since the hanok also functions as her home, people need to make reservations in advance so that she can prepare the meals and drinks sold in the cafe.

This hanok offers gorgeous windows and spacious rooms. It is sought by foreigners who have a special interest in Korean art, as the owner is an expert in Asian art who teaches Korean calligraphy to visitors. 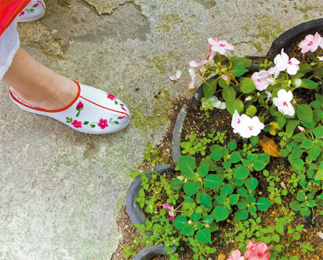 Emiko Miyano, a guest at the Tea Guesthouse, shows off a traditional Korean shoe she rented to wear during her stay. By Kwon Hyuk-jae

The guesthouse has four rooms, two of which are available to rent for 50,000 won each, including breakfast.