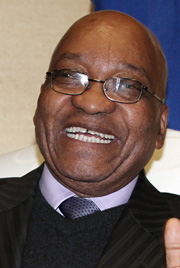 South African President Jacob Zuma called on North Korea to stop its belligerent behavior and give up the nuclear ambitions he said would only deepen the insecurity of the communist state.

In an exclusive interview with Yonhap News Agency on Thursday, Zuma also called on South and North Korea to engage in “intense dialogue,” citing his country’s own experience that only engagement will bring about reconciliation.

“No real security can be provided through military means or the development of nuclear weapons,” Zuma said. “In fact, this creates greater insecurity.”

The international community has often advised North Korea to learn from South Africa, which gave up its nuclear-development program in 1989, when Cuban forces left Angola and fears arose about the government’s stability. South Africa was the first nation to voluntarily give up nuclear arms.

Pyongyang is believed to have up to half a dozen nuclear weapons. The country defiantly detonated a second nuclear device and test-fired a long-range missile in 2009, drawing international sanctions.

South Korea, the United States, China, Russia and Japan have tried to engage the North in six-party denuclearization negotiations, offering massive economic and diplomatic rewards in exchange. The talks have been suspended since December 2008.

“South Africa has consistently called for the resumption of the six-party talks and the denuclearization of the Korean Peninsula,” Zuma said. “These would be important steps to ensuring the prosperity and security of the Korean people.”

Zuma said, “only a process of intense dialogue and engagement can produce real progress.”