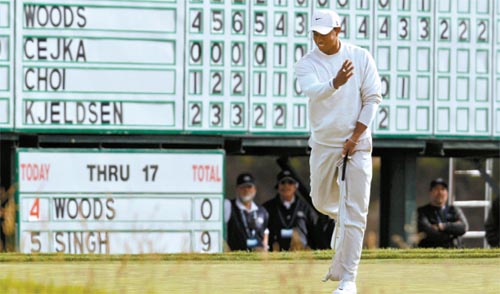 Tiger Woods reacts to a missed putt on the 18th hole during the third round of the U.S. Open golf tournament on June 19 at the Pebble Beach Golf Links in California. [AP/YONHAP]


PEBBLE BEACH, California - Tiger Woods stormed into contention at the U.S. Open with a sizzling back nine on Saturday while Graeme McDowell reclaimed the lead from playing partner Dustin Johnson midway through the third round.

Woods, who began the day tied for 25th, seven strokes off the pace, overcame two early bogeys to make the turn at level par before a scorching back nine of five-under 31 catapulted him into third place, four strokes back. After he curled in a 15-foot birdie putt at the par-three 17th, Woods found himself in a jam at 18 when his tee shot put him behind a tree on the right side of the fairway.

The world No. 1 faded a three-wood around the tree, sending it toward the ocean before bending it onto the green, where he two-putted for a third successive birdie.

“I just kept telling myself ‘get back to even par for the tournament and I’ll be right there,’” Woods told reporters. “I just happened to do one better. It felt good to put it together.”

Northern Irishman McDowell swapped places with long-hitting Johnson when he birdied the ninth while the American bogeyed it. McDowell stood at five under par for a one-shot edge at Pebble Beach.

Earlier, Johnson lived up to his reputation as a slayer of Pebble Beach by leapfrogging McDowell after an eagle and two birdies lifted him to five under par. Johnson had started the day two shots behind McDowell and quickly found himself four behind after the Briton birdied the first two holes in breezy, late afternoon conditions.

A bogey at the third by McDowell helped narrow the gap and then Johnson made up two more strokes on the 290-yard, par-four fourth, which was shortened on Saturday by 40 paces to give players the option of trying to drive the green. Johnson cashed in that option by hitting an iron within five feet of the cup and sinking the short eagle putt.

He followed with a birdie at the par-five sixth hole and nearly aced the 99-yard par-three seventh, spinning the ball back within inches of the cup for a tap-in birdie that lifted him to five under par before he made a bogey at the ninth.

Ernie Els of South Africa was in third place.