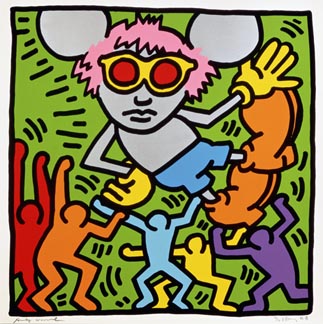 Even if you are an art novice, you may have encountered at least once a certain type of genderless and ageless human figure in frames on t-shirts, coffee mugs and other media. You probably couldn’t identify the artist but his legacy - a decades-long posthumous influence on pop culture - has been enormous.

The first chance for Seoulites to get a good overview of Keith Haring’s body of work arrived last Thursday. The Keith Haring Foundation, the organization the U.S. pop art superstar established a year before his death in 1990, has brought 150 works ranging from varying editions of silk screens to etchings, lithographs and sculptures, to Soma Museum in Olympic Park in southeastern Seoul.

One of the exhibition halls has a club-like setting, with Haring’s fluorescent works under blacklight and, in the background, the thumping beats of the music he listened to while painting. In another room, a 25-minute documentary film on Keith Haring is played in a loop.

Featured outside the museum, surrounded by green lawns and installations by other artists, are bicycles with prints of Haring’s works on them, a collaboration between Korean bicycle producer Corex and the Keith Haring Foundation.

The exhibition comes a few months after the 20th anniversary of Haring’s untimely death due to AIDS-related complications. The collection does not include the drawings that initially made him famous, because the foundation thought it more appropriate to show a broad range of his works instead of focusing on a limited period or type.

“For Korea, as with many other places in the world, I think it’s important to give a good overview introduction,” said Julia Gruen, executive director of the foundation, in an interview. “I know that the images by Keith Haring are well known here and I’m delighted about that. Our mission is showing very popular, well-known images that are not so extreme as to be confusing. We get people attracted first and then we are able to show them more variety later. The time for bringing more complicated works is ahead of us.” 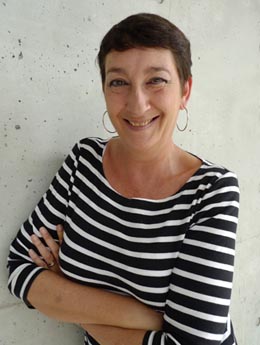 Haring emerged as a fresh figure in the New York art scene in the 1980s when he drew bold and playful works in chalk on black advertising panels in subway stations. “He went to his audience right away,” Gruen said. “Instead of allowing the fine art world to endorse him and introduce him through gallery exhibitions, he came to an audience built in already,”

As a social activist, Haring promoted gay rights and AIDS awareness and fought against nuclear warfare and South African apartheid with human icons, radiant babies and barking dogs. Over the 10 years before his death, the highly prolific artist participated in numerous exhibitions.

Gruen started working with Haring in 1984 as his studio manager. Reminiscing about the days she spent with Haring, the energetic woman said her first job for the artist was to arrange his 26th birthday party at the Paradise Garage nightclub in New York. And there Madonna showcased her breakthrough hit “Like a Virgin” for the first time.

Regarding how to best enjoy Haring’s works, Gruen said, “As far as he was concerned, his job was to make art. Our job is to interpret it. This is why in many cases his works have no titles and he really disliked defining and explaining them. The messages in the works are yours. Come with an open mind, prepare to be affected.”

Q. Would you compare Keith Haring to Andy Warhol?

A. First, their similarity is that they were both from Pennsylvania, gay and famous artists. But their style and philosophy are very different. Keith and Andy were quite close friends. Andy played the role of mentor to Keith but Andy also really enjoyed the kind of excitement that surrounded Keith, a young generation. Something that Keith was able to accomplish with his art was bringing together uptown and downtown - combining the graffiti scene with the more conventional art gallery scene. Even though Andy was throughout his life incredibly well known and owned his own art factory that was a hotbed of all this artistic underground activity, 20 years later, it was Keith. Andy also learned from Keith. The difference, I believe, is that Andy was commenting on pop culture, images and everyday product, putting a kind of ironic twist on things. Even though Keith also had social commentaries to express, he was doing it through his own visual vocabulary. He wasn’t appropriating popular images but used his very own style.

What has been the foundation’s biggest achievement so far?

The foundation was started by Keith. He specified the mission of the foundation very clearly: giving money away to AIDS organizations and organizations that help children in need. And that is very unusual, especially for someone so young, in that his charitable philosophy was active during his lifetime. This isn’t something he developed because he knew he was ill and he’d better make plans to do something special. We are very proud that we have been able to be a self-sustaining organization the way Keith wanted us to be. We don’t accept money from outside and do everything ourselves to give away a lot of money and help a lot of organizations. Keith also specified that we continue to educate the public about his life and work. In the 20 years since Keith died, we have managed to collaborate on solo exhibitions in 27 countries.

Keith Haring was very popular in Japan in the late 1990s. What about now?

What’s happening now is very interesting. It has always been our goal to bring his work wherever possible. There have been solo exhibitions of his work in so many countries and places. But generally the desire as well as the expectation is that people want to see retrospectives and what they are used to seeing. This is understandable. We are not going to fight against this. But we have the passage of time with the kind of strength and respect the work now receives. The timing and the temperature is now right to make exhibitions that are more focused, because in the end it can be a little bit repetitive to always show the greatest hits. In a way, that reinforces a little bit of limited perspective on the work and it’s very important for the artist that focused exhibitions begin to happen. Focus on early works, collaborative works and film works - the output that people don’t really know much about - is really exciting.