It’s gonna be all right, Chu-young

It’s gonna be all right, Chu-young 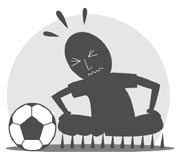 Twelve. This is the number of times a gang shot Colombian defender Andres Escobar when he returned home after participating in the 1994 World Cup.

Escobar had committed an own goal during a match against the United States. He had been trying to block a shot from the opposing team when he inadvertently deflected the ball into his own team’s net.

Colombia lost 2-1 in the match and was unable to proceed to the second round of the finals.

At the time, there were rumors that the Colombian “football mafia” was behind Escobar’s death, angry at having lost a huge amount of money gambling on the match. One of the murderers reportedly shouted “Goal!” as they killed Escobar.

All Escobar did was make a mistake with the ball, and his punishment was death. This is an extreme example, but it shows just how disappointed fans can be when their team commits an own goal.

Even failing to score in a penalty kick isn’t as grave of an offense as making an own goal. It’s called an “own goal” because the team’s own player scores against themselves.

Own goals were once called “suicide goals,” but this expression was deemed too cruel for the players in question, and fans were discouraged from using it beginning in the late 1980s.

Celebrity players aren’t exempt from mistakes, either. In 1991, Lee Dixon of Arsenal in England’s Premier League committed what is often called the “worst own goal in history” in a match against Coventry City.

There is even a player who scored three own goals in one game. In Belgium’s 1995-96 season, during a match between Germinal and Anderlecht, Germinal player Stan van den Buijs became the unlucky player responsible for such a tragedy.

The player responsible for an own goal can become wracked with guilt, and guilt can often become a poison rather than motivation. During the match against Argentina in the 2010 South Africa World Cup, Park Chu-young scored an own goal.

But I am thankful that while Chu-young has been criticized, people for the most part have been understanding of his mistake.

Appearing in a recent commercial for Louis Vuitton, Argentinian coach Diego Maradona even said that he only accepted victory through the efforts of his team’s players, not a victory through own goals by the opposing team.

We should join together and sing out, “It’s O.K., Chu-young! It’s gonna be all right. We still have the Nigeria match on the 23rd.”