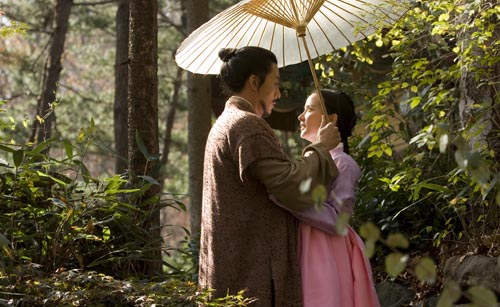 
Football season is regarded as the worst time to release new films because people are glued to the tube, not going to the cinema. But the new Korean film “Banjajeon,” or “The Servant,” which opened on June 2, has broken that widely held belief and has attracted more than two million moviegoers so far.

That’s a hard thing to achieve, especially without A-list actors. But The Servant, which puts a twist on the popular Korean folktale “The Story of Chun-hyang” has proven steamy enough to lure people away from the World Cup excitement.

In the original tale, Lee Mong-ryong, the son of a magistrate, falls in love with Chun-hyang, the daughter of a gisaeng courtesan, while on a visit to Namwon, North Jeolla. When Mong-ryong is called to Hanyang (today’s Seoul), leaving Chun-hyang behind, an official named Byeon Hak-do comes to town as the region’s new district manager. Ruthless and cold-blooded, Byeon wants to seduce Chun-hyang, but she resists because of her commitment to Mong-ryong. An enraged Byeon tortures Chun-hyang, but he is later punished by Mong-ryong, who has become a high-ranking official.

The movie turns this plot upside down as Chun-hyang falls in love with Bang-ja, Mong-ryong’s servant. Unlike the original folktale, Chun-hyang is an ambitious young lady who plays a game of love that ultimately pits Bang-ja against Mong-ryong.

Behind these plot twists is Kim Dae-woo, who wrote, produced and directed the film.

Kim, 48, made his directorial debut with the successful period film “Forbidden Quest” in 2006. The film tells the story of a man from the yangban class who writes pornographic novels. Since yangban members are generally depicted as rigid and morally superior, Forbidden Quest attracted quite a bit of attention when it opened.

Q. Why did you pick “The Story of Chun-hyang”?

A. I wanted to distort the naive ending of the folktale, in which the master, Mong-ryong, simply marries Chun-hyang. This happily-ever-after ending is biased, as it only represents the dreams of ordinary people. I wanted to make a movie about what happens when two men from opposing classes fall in love with the same girl - and The Story of Chun-hyang seemed like a perfect fit. 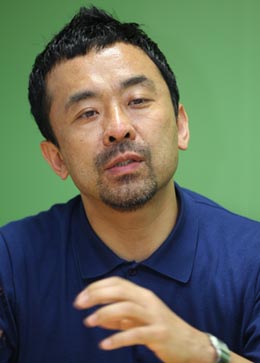 In the movie Bang-ja and Chun-hyang fall in love, but why aren’t they happy?

I wanted to define the movie with just one word - love. But love is a contradiction. In love, we experience the pull of conflict: competition and possession, love and hate, closeness and distance. That is the complexity of love.

Which character has changed the most from the original folktale?

That, of course, is Bang-ja. In the legend, Bang-ja is a submissive character. He doesn’t have the courage to tell Chun-hyang how he feels, but loves her, devotedly. By distorting the ending of the legend, and letting Bang-ja get the love of his life, I hoped to move the audience.

The supporting characters Byeon Hak-do (Song Sae-byeok) and the elderly man Ma (Oh Dal-soo) bring a lot of laughs to the movie.

I cast Song right after I saw him in the movie “Mother.” As I expected, he mastered his character’s multiple personalities. Both actors are very talented at interpreting scripts.

Many have said that Jo Yeo-jeong’s beauty went unnoticed until this movie.

That has been a delightful comment for me, as a director, to hear. If a nude scene just stirs up the media, then the director is at fault. In this movie, the image of Jo and the character of Chun-hyang share many qualities - both are small but bright, brave yet cruel.

Do you think the outrageous nude scene helped make the film a box-office hit?

Well, it certainly didn’t hurt. Nude scenes are difficult for both the actors and the director. I don’t require the actors to do a nude scene “beautifully,” because a nude scene isn’t just a love scene - it is also an action shot. Therefore, I demonstrate the scene to them as I envision it, everything from the sound to the positions. At first, everyone laughed, but then they took it seriously. Nude scenes are really some of the most difficult to film - it’s like shooting a scene in a forest, in a hurricane, where 1,000 lions battle 100 elephants. [Laughs.]