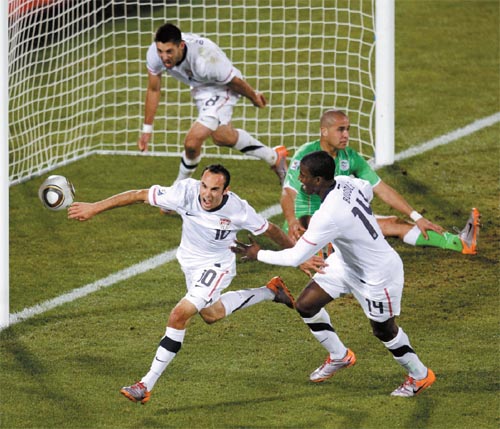 
PRETORIA, South Africa - Landon Donovan scored a goal seconds into stoppage time on Wednesday to give the United States a dramatic 1-0 victory over Algeria, and hand the Americans a place in the last 16 of the World Cup.

The victory gave the Americans top spot in Group C, finishing on five points like England - 1-0 winners over Slovenia on Wednesday - but the United States edged them on goals scored. Slovenia and Algeria were eliminated.

Donovan, who matched a U.S. record with his 11th World Cup appearance, set up the decisive move with a long pass to Jozy Altidore, who raced into the penalty area only for his shot to be blocked by Algerian goalkeeper Rasis Bolhi. Donovan, following up, blasted home the rebound for his fourth World Cup goal, equaling another U.S. mark.

“I’ve been on a long journey these last four years and today I am so stoked and proud,” said Donovan. “Algeria were pushing and we had to take the fight to them. Time felt like it stopped when I scored but I just couldn’t miss it from there.

“We aren’t done yet. We had a bad decision against Slovenia [when a late goal was ruled out], but we are Americans. We get on with it, we don’t complain.”

The Americans were minutes from crashing out, as a draw with the Desert Foxes would not have been enough to move ahead of Slovenia. At the final whistle, the Americans began jumping for joy, Donovan kicking the ball into the stands.

Already smarting from a disallowed goal late in a 2-2 draw with Slovenia last week, the Americans were stung by another questionable decision in the 20th minute against Algeria, one that grew more haunting as the match went on. Herculez Gomez, starting in place of suspended U.S. forward Robbie Findley, recovered his own rebound on a blocked shot and slid the ball across the goal to Clint Dempsey, who put the ball in the back of the net. But the offside flag was up, although television replays appeared to show Dempsey onside.

In the U.S.-Slovenia match, Mali referee Koman Coulibaly disallowed an attempt from Rangers midfielder Maurice Edu in the dying seconds that would have given the Americans a victory.

The Americans sent on Edu and DaMarcus Beasley late in the second half, risking all as they searched for the vital goal. But a Dempsey free kick soared well over the crossbar in the 84th minute and Algeria’s Hassan Yebda flicked a shot high in the 88th minute and all seemed lost until Donovan’s heroics.

England and Germany will renew one of the World Cup’s great rivalries in the last 16 after both qualified for the knockout stage on Wednesday.

England went through by beating Slovenia 1-0 with a Jermain Defoe volley, but the United States pipped them to the top spot in Group C when Donovan scored in stoppage time.

Later, Germany won Group D after Mesut Ozil’s left-footed drive into the top corner on the hour-mark proved enough to beat Ghana 1-0 at Soccer City, setting up the clash with England in Bloemfontein on Sunday.

In Nelspruit, Australia defeated Serbia 2-1 but Ghana still grabbed the second ticket from Group D by virtue of a superior goal difference to the Australians, whose challenge was fatally undermined by their opening thrashing by Germany. The Ghanaians will ensure Africa has at least one representative in the second round where they will face the United States.

In Port Elizabeth, Defoe saved England from a humiliating first-round exit when the Tottenham striker, who replaced Emile Heskey in the line-up, volleyed home from close range in the 23rd minute, connecting with James Milner’s cross.

England coach Fabio Capello’s relief was obvious after seeing his players come back from the brink of elimination following two poor opening draws with the United States and Algeria that had sparked dissent in the camp.

“The team’s performance was really very good, we created lots of chances for the second goal but couldn’t get it. We had to suffer in the last few minutes, it was very important to win today.”

England beat West Germany in the 1966 final, but the last encounter at a World Cup ended in a penalty shootout win for the Germans in the 1990 semifinal in Italy.