[Viewpoint] Bring back my childhood river

[Viewpoint] Bring back my childhood river 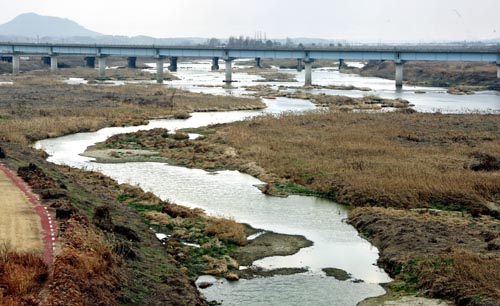 I was born and raised in a village along the Yeongsan River in Hampyeong, South Jeolla. When I was young, the Yeongsan River was young and alive. The river was as abundant, fresh and beautiful as it can be. Fishing ships drew their nets on the vast river, and cargo ships traveled up and down the river with the rise and ebbing of tides. The river provided air and milk to the rich fields, being the mother to the region.

However, an estuary dam was constructed on the Yeongsan River in 1981, and the river died, leaving only an empty shell behind.

The Yeongsan River is no longer a river. It became a long freshwater lake stretching across the fields as if it was some swamp. Because it lost its function and character as a river, people now call it “Yeongsan Lake,” instead of “Yeongsan River.”

For three decades, earth and sand, sludge and garbage piled up and then decayed in a repetitive cycle and the water gave off a terribly foul smell. The upper streams of the river suffered the most damage and you could often spot river branches that had dried up completely.

Others branches were filled with stagnant, rotten water, but they became so narrow that you can easily jump over them. They don’t deserve to be called part of the river system. They are dirty streams. The tributaries had such beautiful and romantic names such as the Hwangryong River, or the Yellow Dragon River, and Geukrak River, or the River of Heaven. It is truly regrettable that so many branches became eyesores.

It was once a legend that the Yeongsan River was a lustrous symbol of abundance. Now it has been reduced to sewage works, where completely rotten, foul smelling dirt and sludge rise higher in height than an adult. What can we do about this environmental catastrophe?

As someone who had considered the river the source of life, I am truly heartbroken to witness the tragic fate of the Yeongsan River. We cannot just let the river die away without making any effort. If a human gets seriously sick, he needs to receive treatment and go under an operation. The ailing river also needs fundamental treatments and operations.

If the waterway is blocked, it should be diverted. If the river bottom is too high, it should be dug up. If the river levees are vulnerable, they need to be reinforced. These measures are the basic responsibilities of humans, who are living in the environment while overcoming its flaws.

Therefore, not only the South Jeolla Provincial Government but also other local autonomous government agencies in the region where the river flows through have been working on the project to revive the Yeongsan River long before the Lee Myung-bak administration came to power.

They have been constantly demanding more aggressive assistance and efforts from the government. And the government heard the call and launched a full-scale river revival project, and a considerable part of the operation has already begun.

Then what is going on now? Should we stop resuscitating the Yeongsan River? Should we let the dying river perish?

Are you saying that such efforts are destroying the natural environment and the ecosystem? Are you saying you will take an action if the government goes on with the river revival project?

Lately, I am very depressed, sad and anxious as these arguments stir up society. I cannot sleep well at night because of the worry that the project to revive the Yeongsan River might be suspended, and my beloved river would be abandoned as a rotten and useless eyesore again.

Since I am a man who is committed to preserve the nature as much as anyone, I, of course, would not tolerate anyone attempting to damage a beautiful river with clean water.

Moreover, I cannot bear the thought of recklessly meddling with the picturesque rivers and mountains in the name of development.

Nevertheless, the Yeongsan River project is a completely different case. We will preserve and treasure the revived Yeongsan River and pass it on to the next generation.

Hopefully, the opponents will understand that the Yeongsan River project is not for the interests of a certain individual or political faction but is a meaningful national project for all of us and future generations.

I wish we can all bring our thoughts together to back up the efforts to revive the Yeongsan River.

*Translation by the JoongAng Daily staff.
The writer, a poet, is the chairman of the Korea Publication Ethics Commission.