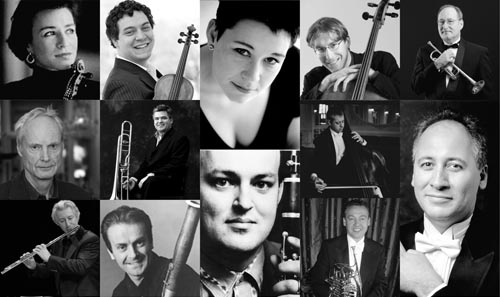 The Lindenbaum Music Festival, running from June 28 through July 5, is an educational music festival with distinguished music faculty and 13 principal players from world-renowned orchestras. A hundred young Korean musicians, who have been selected through auditions, will collaborate with currently active orchestral musicians during each section and rehearse together. See MUSIC, left. Provided by the organizer

Saturday: For its 101st regular concert, the Seoul Metropolitan Youth Orchestra will be joined by a string quartet from the Toho College of Music in Japan. Together, they will play the music of Bach and Mozart. In preparation for the concert, the youth orchestra participated in musical exchange programs with the Toho Gakuen School of Music, which is the top-ranked music school in Japan.

Saturday: The booking organization specializing in bring foreign indie bands to Korea, Super Color Super, is hosting a one-year anniversary show this weekend. The concert will be held in a round-robin format: The bands will be set up at the same time along the perimeter of the room with the audience in the middle. Then each band takes turns playing one song until every band has played. Bands include both bigger expat bands and local indie bands such as the all-female Juck Juck Haeseo Grunge, Vidulgi Ooyoo and We Need Surgery.

Sunday: The man known in Korea as the godfather of rock returns for his first concert at the Sejong Center in eight years. In December, Shin became the first Asian musician to have a tribute guitar made for him by Fender Musical Instruments Corp. He will play the guitar, which was named the “Shin Joong-hyun Tribute Stratocaster,” at the concert.

Monday: This educational music festival will include distinguished musicians such as Charles Dutoit, a Swiss conductor, Chantal Juillet, artistic director of the Saratoga Festival in the U.S., and 13 principal players from world-renowned orchestras. The Lindenbaum Festival Orchestra will perform with Charles Dutoit and pianist Paik Kun-woo.

The festival starts at 8 p.m.

July 9: Canadian electronic musician Daniel Snaith, better known as Caribou, will perform in Hongdae next week along with Sssighborg and Byul.org. Caribou is promoting his new album “Swim” on this tour. It is his first album since his 2007 Polaris Music Prize-winning record “Andorra.” Caribou specializes in electro-tinged pop music, and he is sure to play some of his past hits at the show including “Melody Day” and “She’s the One.”

Performance times and dates vary by production over the course of the weeklong festival, but show times are usually in the early afternoons. Check the production schedule on the festival’s Web site.

Today to Tomorrow: For their annual season, choreographers Jo Nam-gyu and Song Jung-eun present “A River of Unforgettable II,” a work that revolves around the first Qin Dynasty (221-206 BC) emperor, who united China.

Saturday to Sunday: The biggest B-boy and break dancing competition in Korea is coming to Olympic Park this weekend. The championship features eight international teams that will compete to claim the title of “master champion.” In addition to the competition, an urban art festival will take place in the Meeting Square at Olympic Park. The festival includes public graffiti, a street market and B-boy circles.

The championship takes place between 6 p.m. and 9 p.m. both days.

July 9 to 10: The latest work by acclaimed choreographer Hong Sung-yup blends ballet with contemporary dance, stylish sets and edgy concepts. Hong’s work has been presented in Korea and around the world, including Denmark, Canada, France and Germany.

A NIGHT WITH ROLAND PETIT

In this program, he presents three pieces of choreography: “L’Arlesienne,” “Le Jeune homme et la Mort” and excerpts from “Carmen.”

July 30 to Aug. 15: The annual Keochang International Festival of Theatre will showcase international and domestic theatrical companies that perform on themes of nature, human and play. The festival holds its performances outdoors in open theaters. Productions include Othello by the Japanese theater company Kunauka. Performance times vary by production. Refer to schedule on festival Web site.

From Seoul Nambu Bus Terminal, take a bus to Geochang (about an hour and a half), then take a taxi to the festival.

Saturday to July 11: Presented by Pansori Project ‘ZA’, this performance is inspired by Bertolt Brecht’s German play, “The Good Woman of Setzuan.” But this work is not just a translation or reproduction of the play. Instead, it shows its unique characteristics, a combination of the West and East with pansori, a form of traditional Korean music. The performance depicts a story of a woman who wants to live with her honesty, and her brother, who tries to protect his sister from the world that frustrates her.

July 15: Based on the story of a shaman goddess named Bari, this traditional Korean musical brings a myth to the real world with Gyeonggi folk song, which represents the pansori of Gyeonggi. This musical, which consists of three chapters, will be presented by Gyeonggi Provincial Arts Groups with a variety of Korean traditional songs and dance.

Performances start at 4 and 8 p.m.

Friday to July 7: Taekwondo athletes from around the world will gather in Muju County for the fourth annual taekwondo festival this weekend. Programs include not only traditional taekwondo competitions such as pumsae (movement), gyeorugi (sparring) and taekwondo aerobics, but also taekwondo performances, cultural activities and sightseeing tours of Muju, Buan and Jeonju.

From Seoul, take a bus to Jeonju Station.

July 17 to 25: The Boryeong Mud Festival is one of the most popular festivals among expats and travelers in Korea. The festival - now in its 13thyear - includes mud slides, mud fights, mud massages and mud sports. The event will be heavily attended so it’s wise to make plans in advance.

Take a bus to Daecheon from Seoul Nambu Terminal (a little over two hours). Then take a local bus from Daecheon station to Daecheon Beach.(011) 438-4865, www.mudfestival.or.kr

July 15 to July 25: The Puchon International Fantastic Film Festival (or PiFan) has grown to become the most representative symbol of Bucheon, Gyeonggi, and is now one of Korea’s three major film festivals. Celebrating its 14th anniversary, the festival will select new innovative movies as well as controversial ones. Also slated for PiFan 2010 are special programs including Family Fanta, movie screenings for all audiences, and Ani Fanta, one of the most popular programs that shows unique animated films. Most of the events will take place at the Boksagol Cultural Center. However, there will also be screenings at the Primus Sopoong Multiplex, which is located in the Bucheon Bus Terminal. In addition to movie screenings, the Fantastic Concert, Fantastic Book Fair and many other events will be held.

The festival’s hours vary based on the films being screened.

Tickets range from free of charge to 10,000 won depending on the time, place and event.

Aug. 4 to 9: The fifth annual Busan International Magic Festival is Korea’s sole magic festival and brings together both domestic and foreign magicians for a weeklong spectacle of magic galas, shows and competitions. Featuring three dozen magicians from Korea, the U.S., France and Germany, the festival will also put on special magic shows for children.

A pass for the entire festival is $220

*Event information has been culled from the Korea Tourism Organization and other online sources.