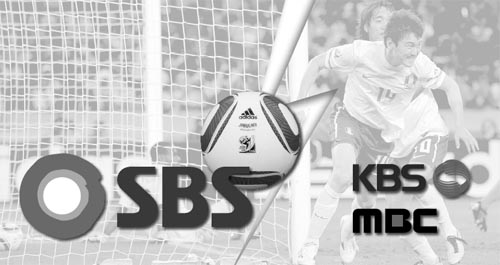 SBS reaped huge ad revenues with Korea’s advancement to the Round of 16. But because SBS canceled its regularly scheduled programming during the Cup, along with the friction that has arisen among broadcasters, SBS is expected to see losses in the long term.

The Korea Broadcast Advertising Corporation said SBS has seen 65 billion won ($54 million) in World Cup ad sales as of early this week. SBS’s total ad revenue is expected to be around 70 billion won. Seventy-six advertisements aired for each of Korea’s three matches of the Round of 32, at around 92 million won per 15 seconds of airtime.

“It is a big feat for one broadcaster to have accomplished,” said Kim In-sup, public relations head at the Korea Broadcast Advertising Corporation. “During the 2002 Korea-Japan World Cup games, each broadcaster earned around 30 million won per game, per advertisement, and in the 2006 games in Germany, they were estimated to have earned around 25 million won per game.”

Despite the revenue, however, SBS didn’t do so well for its bottom line. For the exclusive rights to air the matches, SBS paid 110 billion won in production costs alone. This includes the cancellation of its regular programs. SBS also had to pay FIFA a broadcasting rights fee of 6.5 billion won when the Korean football team advanced to the Round of 16.

Ratings for non-Korean matches, however, were insignificant. The Japan-Netherlands game had an audience share of just 20.7 percent while the North Korea-Portugal game saw 23.3 percent. For most other games, SBS had an average share of 10 percent.

Meanwhile, other broadcasting networks saw a leap in ratings for their regular programs, including MBC’s “Dongui” and KBS 2TV’s “Baker King, Kim Tak-goo.” Both shows had audience shares of more than 30 percent, becoming the highest-rated programs in their respective time slots.

“SBS provided other broadcasters with opportunities [to earn higher ratings] during the World Cup games because they canceled all of their regular dramas and entertainment programs,” said an official at SBS’s drama division. “Now, our work will be to gain back the viewers we have lost [by canceling shows].”

As such, SBS announced its new entertainment program schedule on Monday, which features new shows including “Running Man” and “Yeongunghogul.”

“We will lead the trend in entertainment programming with new formats and fresh ideas,” said an SBS official.

SBS has also come under criticism for winning the exclusive World Cup rights from rivals KBS and MBC, which have characterized SBS as a “money-hungry private broadcaster.”

“We have no regrets about deciding to secure the exclusive rights to air the World Cup games,” Noh added. “Viewers are benefiting from their broadened channel selection choices, and that can be seen in the rise in ratings for programs on other broadcasting networks. It is definitely a waste of electricity for three broadcasters to air [World Cup games].”