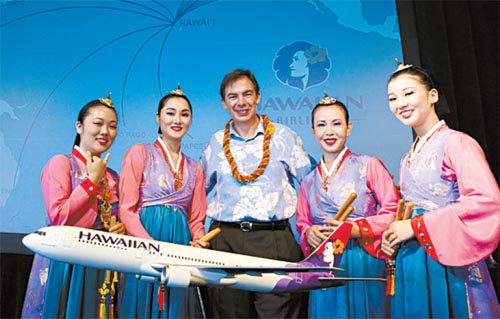 Hawaiian Airlines announced on Wednesday that it is launching a new service to Korea as part of its ambitious expansion into Asia, hoping to cash in on the growing number of Korean visitors to the islands.

The airline’s President and CEO Mark Dunkerley said service between Honolulu and Korea’s main airport at Incheon will start in January 2011, with four flights per week. Tickets will go on sale later this summer.

“This is for us the next step in our strategic endeavor to make Asia an important source of traffic for Hawaiian Airlines,” Dunkerley said in an interview before the company made its official announcement.

He said Incheon will be a key hub for Hawaiian because of its accessibility and proximity to other nations, notably China.

Hawaii’s largest carrier could soon be serving both Japan and Korea for the first time as it evolves from an inter-island and U.S. West Coast carrier into an international player.

Last month, Hawaiian received tentative approval from the U.S. Department of Transportation to receive one of four new routes to Tokyo’s Haneda airport, which has been off-limits to U.S. carriers since 1978. Hawaiian beat out much larger competitors for the prized route, including both Continental and United Airlines.

“We are at the point now where we’re getting a footprint in the most important countries for travel between Asia and Hawaii. So this represents far more than another route announcement,” Dunkerley said. “This is the moment at which we are adding another leg to what we do.”

Dunkerley would not disclose what other routes Hawaiian is considering, but the company has been making a strong marketing push for the growing Chinese market.

Korean Airlines, which has a code-share agreement with Hawaiian, is the only carrier that currently provides direct service flights between Honolulu and Incheon. On June 12, Korean Air added three more weekly flights, giving it a total of 10 flights a week.

Hawaii has benefited from a program that began in November 2008 that allows Koreans to enter the United States without visas. Hawaii welcomed 20,211 Koreans in the first three months of this year, a 91-percent increase over the same period last year. On average, Koreans spent about $238 a day per person, about $100 more than a visitor from the West Coast.

The state predicts 74,000 Koreans will visit this year, nearly double the 38,110 visitors in 2008, before the visa waiver program.

Hawaii tourism liaison Marsha Wienert said the new routes from Korea are “huge” for the travel industry and economy. “The potential is just ready to explode,” she said. “The visa waiver was the first thing, the additional air seats is the second thing and an improving economy is the third. All the ducks are in a row.”

In April, Hawaiian took delivery of the first of as many as 27 new 294-seat Airbus wide-body aircraft, which will replace its fleet of Boeing jets and make the longer Asian routes possible. It also has recently added routes between Hawaii and California.

The company’s expansion comes just five years after it emerged from bankruptcy protection, while the rest of the industry continues to be shaken by mergers, restructuring and heavy cuts to staff and routes. Dunkerley said because Hawaiian has been profitable for the past two years, it has allowed the company to focus on its long-term goals and investment instead of its survival.