Taegeuk Warrior returns to life as a soldier

Taegeuk Warrior returns to life as a soldier 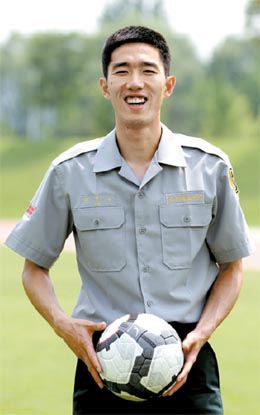 Kim Jung-woo at the Korea Armed Forces Athletics Corps base in Seongnam, Gyeonggi. By Lee Youg-mok

Coming off a successful run at the 2010 World Cup, the 28-year-old defensive midfielder is the most popular man on the base of the Korea Armed Forces Athletics Corps.

The rail-thin Kim - listed at 182 centimeters tall (5 feet 10 inches) and 71 kilograms (157 pounds) - made his World Cup debut in South Africa and received high praise for his play. At 62nd, Kim was the highest ranked Korean player on the 2010 FIFA World Cup Castrol Index, which measures the performance of footballers who took part in the tournament.

Kim returned to KAFC’s base in Seongnam, Gyeonggi after South Korea was eliminated last month from the Round of 16. He is now honing his skills as part of the military’s Gwangju Sangmu Phoenix team, fulfilling his mandatory military service.

When asked about how he was enjoying his time at the base, Kim replied: “Private First Class Kim is a happy man.”

But his thoughts still linger on South Korea’s missed chances at the World Cup.

“I can still see Luis Suarez’s second goal from our Round of 16 match against Uruguay,” he says regretfully.

These days, however, Kim is enjoying being back in Korea and closer to his loved ones, including actress girlfriend Lee Hyun-kyung, who goes by the stage name of Yeon-doo.

“When I’m upset, I often talk to Hyun-kyung and it often helps me feel better,” said Kim. “She’s a good listener and it’s the best way for me to relieve stress.”

When the national football team went to an overseas training camp in January, Kim’s phone bill came to 2.4 million won ($1,963). Kim estimates the phone bill reached upwards of 30 million won during his stay in South Africa for the 2010 World Cup. But Kim says the long distance bills are well worth it, since Lee helps him take his mind off some of the stress that comes with being a football player.

Kim recently had dinner with Lee in Gangnam, southern Seoul before reporting back to duty.

In the past, strangers often came up to Lee, recognizing her from her roles on various TV dramas. But now, Kim is the one who people approach for autographs.

“[The fame] can be a bit tough to deal with sometimes, but it felt great to spend time with Hyun-kyung,” Kim said.

Among soldiers, Kim has become a figure of respect and admiration.

“Kim’s salute [during the Korean national anthem] was a big deal among his peers during the World Cup,” stated Major Chun Soo-woo at the KAFAC. “His strong will makes him a perfect soldier.”