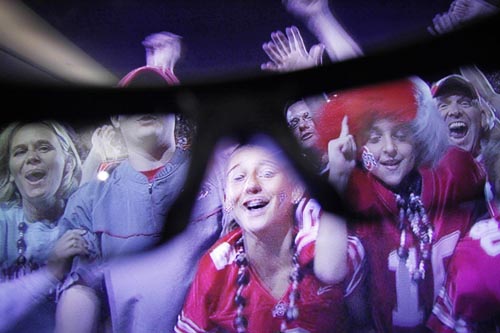 In this June 22, 2010 file photo, football fans are shown through 3-D glasses during a game seen on a Sony Bravia HDTV with 3-D, in New York. [AP/YONHAP]

Let’s say you’ve started lusting for a 3-D television. Never mind that when you get to the store to sample 3-D TV, you discover that World Cup soccer in 3-D may not grab you like a scene from the 3-D animated film “Monsters vs. Aliens.” The soccer match seems disappointingly flat in its wide shots. “Monsters vs. Aliens” immerses you in its animated antics.

You’ve just learned a basic lesson of 3-D: It isn’t all the same.

But when it’s good, it’s very good. It sucks you in. It’s in your face, you’re in its face. Or so it seems. No wonder you’re picturing one of these sleek, wide-screen beauties in your own living room.

“That 3-D theater experience captivated millions of people and made them realize, ‘There’s a new dimension that I’ve been missing,”’ said Dan Schinasi, senior marketing manager for HDTV product planning in Samsung’s Visual Display Product Group. “The result is, they’re saying, ‘I want to experience that at home.”’

Granted, you can’t yet frolic with the Na’vi in your home in 3-D; only a 2-D edition of “Avatar” is currently for sale. But ESPN is airing 3-D sports events (including World Cup soccer). DirecTV has just flipped the switch on a trio of 3-D channels. And Discovery says its 3-D channel, in partnership with Sony and IMAX, will debut early next year.

Headed to the marketplace by year-end will be dozens of 3-D movies, games and other home videos viewable with 3-D-ready Blu-ray and PlayStation players.

Meanwhile, some 3-D TVs boast an additional feature that converts any 2-D show to 3-D, at least in a limited version that offers a measure of interior depth, although nothing will leap out at you into the foreground.

“3-D is such an engaging experience that when you put on the glasses and see something well shot in 3-D, it’s quite different from anything you’ve ever seen before on TV,” said veteran producer and network boss Garth Ancier. “It’s like looking into another world, as opposed to a flat world.”