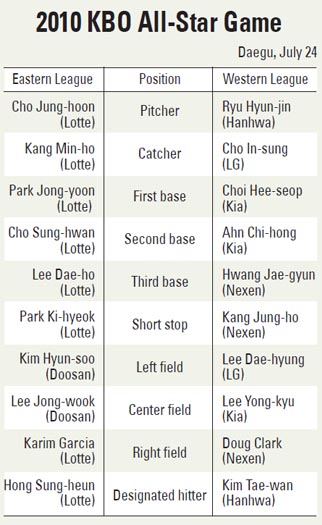 The 33-year-old veteran is having a strong season and is ranked among the top five in all major offensive categories except stolen bases. Hong is batting .349 with 21 home runs and 91 RBI. Hong broke into the KBO with the Doosan Bears in 1999 and won the top rookie honors as a catcher. He would go onto become one of the top players at his position before converting to designated hitter in 2007. Hong signed with the Giants in 2008.

Lotte players dominate the Eastern League starting lineup, with a total of eight Giants representatives. In fact, the top three vote getters are all Lotte Giants players. Karim Garcia earned 786,941 votes, while Lee Dae-ho received 786,392 votes. The only two players on the Eastern League squad’s starting lineup not from Lotte are Kim Hyun-soo and Lee Jong-wook of the Doosan Bears.

Cho Jung-hoon earned a spot on the All-Star team’s starting lineup for the first time in his career and will get to start in Daegu on July 24. Park Jong-yoon also earned a starting spot over other notables such as Park Jung-kwon of the SK Wyverns. SK and the Samsung Lions, the top two teams in the league standings, failed to produce a single player in the starting lineup.

Hanhwa pitcher Ryu Hyun-jin earned the most votes among Western League players at 779,938. The 23-year-old hurler makes his return as the starting pitcher of the Western League All-Stars for the first time since 2007. Ryu has earned 11 wins and boasts the lowest ERA in the league at 1.69 and the most strikeouts at 133.

KBO held voting from January to July 11 at baseball stadiums as well as through online and mobile voting. While baseball fans chose the starting members of the All-Star game, managers of the respective teams have the prerogative to select 12 players each to round out their teams. Kim Sung-geun of the SK Wyverns will manage the Eastern League squad while Cho Beom-hyun will manage the Western League team.