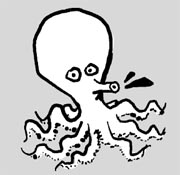 Few species show as much devotion to its offspring as the octopus. It mates just once during its 3- to 4-year lifetime. After laying thousands of eggs, the female octopus keeps vigil until they hatch, only to die soon thereafter. The male lives only a few months after mating.

Our ancestors named this extraordinary creature muneo, or “letter fish.” Perhaps it was in reference to the octopus’ intelligence - its orb-like head indicating a large brain and its black ink resembling the ink used for oriental calligraphy. Muneo isn’t a Chinese word either - our word is a purely Korean invention.

The unique regard Koreans have for the octopus can also be seen in our meticulous preparation of octopus dishes to pay respects to our forefathers at the ancestral rites table. In Andong, the Korean home of Confucian culture and tradition, descendants prepare octopus stew, jerky and skewers for their ancestral rites.

In the West, the name for the octopus is simply derived from its number of legs: “octa” means eight. Only recently has the West started paying attention to the intelligence of octopuses. The octopus has both short- and long-term memory, it’s been found, and it can even learn through trial and error. In a 1988 article in the science journal Discover, U.S. and Canadian scholars discovered that octopuses were so clever that they could kid around.

In the 2010 World Cup, in which Spain won the championship, Paul - a prognosticating octopus with German residency - has emerged as the tourney’s most popular star. Paul the Octopus correctly predicted the winners of eight Cup matches, including Spain’s win over the Netherlands in the final. Not surprisingly, the press went into a tizzy, broadcasting Paul in his tank picking the match winners.

The media attributed the octopus’ oracular skills to the “learning effect.” But Paul’s prescience can’t just be attributed to luck or science alone: The chances of correctly picking the winners of all eight games were one out of 256. This octopus oracle displayed seemingly supernatural powers that would be the envy of any professional gambler.

Paul, who is just a few months shy of his third birthday, is in the twilight of his life. He won’t be around to play prognosticator again in the Brazil World Cup four years from now. And when Paul returns to the big ocean up in the sky, his secret will most likely go with him to his grave and remain a mystery to us all.

It’s nice to know that our ancestors had the wisdom to acknowledge the octopus’ intelligence - and its supernatural gifts - long ago.

In Spain, pulpo, cooked octopus with a dash of paprika and drizzled olive oil, is a popular dish, and it’s similar to octopus dishes in Korea. And it all makes me wonder: Perhaps it’s no coincidence that the Spanish won the Cup - after discovering how delicious and special the octopus is, they learned to pass it on and pass the ball, too.