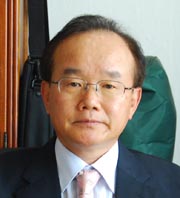 The World Institute for North Korean Studies, or WINK, which is housed in a small office in Yeoksam-dong, in southern Seoul, had an opening ceremony attended by dozens of well-known North Korea experts.

The attention it has already gained is primarily because founder An Chan-il, a visiting professor at the University of Virginia, is heading the institution. An, a leading scholar in North Korean issues, is regarded as one of the most successful North Korean defectors living in the South. Three of the 10 researchers at the institute are also scholars who defected from the North.

Attention is also being paid to An’s call for a paradigm shift in North Korean studies. An says that current studies of the reclusive country, in South Korea or elsewhere, are not engaging the North, either because of ideological differences or a lack of interest in doing so. Therefore, the research has little impact on North Korea.

“Unlike other research institutes whose focuses are mainly on analyzing issues generating from North Korea, we will provide alternative solutions that North Korea can use,” said An, 56, in an interview before the opening ceremony.

“The alternative solutions we will provide will in particular cover the areas of politics, economy and social integration.”

An said North Korea, which is currently in a leadership transition period, will inevitably face a change in its political system. The country is also experiencing a worsening economy and a widening gap between its leaders and the public.

An said that helping North Korean leadership deal with major challenges will help it move toward opening up to the outside world and reform.

“Rather than suggesting solutions that are too much for the country to take, or which could alienate it, we think that recommendations on how it can get closer to the rest of the world without threatening the leaders’ grip on power is the most effective approach,” he said.

The name of the institute, WINK, was chosen with that very gesture in mind, he said. “We want to send a wink as a sign of recognition.”

An also wants the institute to become a network for North Korean defectors.

Currently, there is no single entity that binds together the roughly 21,000 North Korean defectors scattered in 24 countries, including 19,000 defectors in South Korea, which has around 20 associations of defectors, such as North Korean Defectors and North Korea Intellectual Solidarity.

An said he will try to bring together those separate associations in Korea and North America to form a global network.

“A unified association of defectors could make it easy to raise defectors’ voices and speed up change in the North,” he said.

A former soldier, An defected to the South in 1979. He received a bachelor’s degree in political science and international relations at Korea University and a doctoral degree in politics at Konkuk University. He is also teaching North Korean studies at Chung-Ang University.