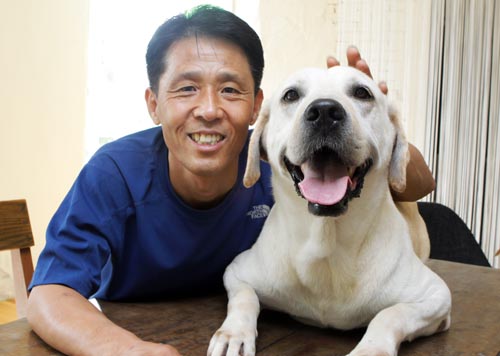 Owner and trainer Kim Zong-kwon poses with Dal-yi, the heroine of the film “Maumi 2.” [YONHAP]

Like other A-list actors, she has her own chair when she’s on set. She has a private black van with cushy red carpet inside. And she was the highest paid actor in “Maumi 2,” which opened yesterday in theaters nationwide.

But this lady is no diva: she isn’t picky about makeup or camera angles, nor is she particular about what she eats. After a tough scene, perhaps one that requires her to run a lot, all she needs is a couple pieces of meat.

Her name is Dal, which means “moon” in Korean, and people call her Dal-yi (the “yi” is a particle that is attached to Korean names). She first played Maumi in the 2006 film “Hearty Paws,” which was also her screen debut.

In Maumi 2, the sequel to Hearty Paws, Dal-yi plays a devoted mother dog who embarks on a journey to find her puppy, who is kidnapped by villains.

Dal-yi has great timing on-screen and off, knowing just when to let out a low snarl to express discomfort and when to let loose and bark.

The movie was far more demanding for the 10-year-old Labrador Retriever than the previous installment. But Dal-yi, ever the professional actress, handled it with grace - not an easy feat after giving birth to four pups last July.

With Maumi 2, Dal-yi has become the first four-legged actress to star in a sequel. In fact, Maumi 2 is the nation’s first film franchise starring an animal.

To find out more about Dal-yi’s experiences on set and off, the JoongAng Daily talked to Kim Zong-kwon, Dal-yi’s owner and trainer.

Kim, who once owned a factory that manufactured cotton gloves, adopted Dal-yi from an acquaintance when she was just 60 days old.

The puppy changed Kim’s life. After Kim had to shut down his business because of health problems, he opened an animal acting academy in Gwangju, Gyeonggi, as a tribute to Dal-yi, and it has been a big success for both him and his animal companion. 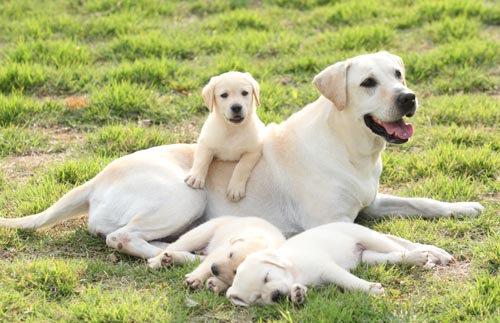 Dal-yi plays a devoted mother dog who embarks on a journey to bring back her lost puppy in “Maumi 2.” Provided by Lotte Entertainment


Q. Did you adopt Dal-yi with the idea of training her for films or did you see her cinematic potential as you were raising her?

A. I love animals. Dal-yi was a gift from a friend, but I soon realized that she had special talent. When she came to live with me she was just 60 days old, but she already understood basic commands such as “sit,” “down” and “stand.” Ordinary dogs understand about 15 words, but Dal-yi understands nearly 80. She’s really smart.

How long was Dal-yi’s day during the production of Maumi 2?

Dal-yi filmed between two to three hours a day on average. With human actors, you get better results if you shoot the same scene over and over again but animals are different. The longer it takes to shoot a scene, the more distracted they become. So everyone on set prepared for scenes before Dal-yi was brought in.

How did you teach her to act?

The director sent me the details of Dal-yi’s scenes so I could start training her. Practice was the only way to prepare Dal-yi for her scenes. And she never refuses training sessions.

Did Dal-yi receive special treatment from the production staff?

Before filming began, director Lee Jung-chul and the camera crew would spend a couple of days with her a week. They felt they needed the time with Dal-yi to ensure a good outcome. And it worked.