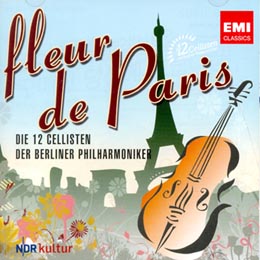 Die 12 Cellisten der Berliner Philharmoniker, or the 12 Cellists of the Berlin Philharmonic, is relatively familiar to Koreans because the group has visited the country every two years since the mid-1990s.

The group’s latest album, “Fleur de Paris,” which was released in tandem with its two-day concert earlier this month, represents the 12 Cellists’ effort to reach a wider audience. It is full of songs related to one of the most romantic cities in the world. The 18 tracks include songs by French composers such as Debussy, Ravel and Satie. There are also instrumental versions of Edith Piaf’s “La Vie En Rose” and Jean Drejac’s “Sous le Ciel de Paris.” The cellists also play Poulenc’s “Figure Humaine,” a song that’s rarely heard due to its difficulty.

The musicians, considered among the best in the world, transform musical pieces that otherwise could have ended up as cliched remakes. All of the tracks manage to be romantic, beautiful and serious at the same time.