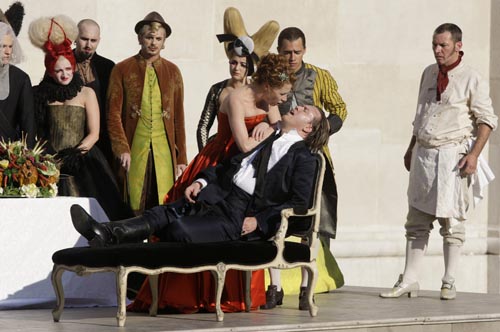 The curtain rises this Sunday on the Salzburg Festival, that ultra-swank summer extravaganza of high-end entertainment which fetes its 90th anniversary this year.

“Where God and Man Collide” is the magniloquent motto for the month-long series of concerts, operas and plays, where tickets cost up to 370 euros ($470).

Mythology also features among the spoken-theatre productions, including Sophocles’ “Oedipus at Colonus” in a new translation by German director Peter Stein and “Phedre” by Jean Racine.

It has always been a swish affair since Hofmannsthal founded it in 1920 with theater director Max Reinhardt, composer Richard Strauss, set designer Alfred Roller and opera conductor Franz Schalk.

Karajan was Salzburg’s autocratic ruler from 1960 until his death in 1989. But in the later years of his tenure, he was blamed for the festival’s artistic stagnation, reputedly refusing rival conductors to perform and focussing on a narrow core of classical and romantic repertoire.

The aim of Belgian impresario Gerard Mortier, who took over after Karajan’s death, was to create a “New Salzburg” with broader and more modern repertoire in unconventional and even provocative stagings.

Following a five-year stint with German composer Peter Ruzicka at the helm, the current chief Juergen Flimm took over in 2006.

But he is quitting after this year’s proceedings and will be succeeded by Austrian-born Alexander Pereira, who is currently head of the Zurich opera house.

Among this year’s new productions, “Elektra” is being staged by German director Nikolaus Lehnhoff with Italian maestro Daniele Gatti in the pit.