Not a house but a burden

Not a house but a burden 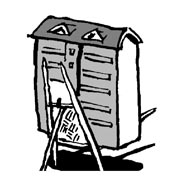 The modern apartment building can be traced back to the insulae of ancient Rome, which were built to accommodate the rapidly expanding lower class. This was a five-to-six-story multi-purpose building built of brick and cement. On the ground floor, there were spaces for shops and businesses, and the floors above it were used for residential purposes. In many cases, the insulae were insanitary because of an ineffective drainage system.

The person who introduced a model for modern apartments was the French architect Le Corbusier. The collective housing units he built in Marseilles in the 1950s had a modern style and were supported by pilotis (stilts) on the ground floor. However, the apartments soon became akin to tenements because they were occupied by the urban poor.

In Korea, the first large-scale apartment complex was built in 1964. The Korea Housing Corporation built 10 six-story apartment buildings for 642 households in Dohwa-dong, Mapo District, Seoul. But the occupancy rate was as low as 10 percent due to the strong belief that apartments were inconvenient. There was also a rumor that the briquette boilers used to heat the buildings were bad for the health. To test this theory, the housing corporation did an experiment with lab mice. When that failed to restore the public’s confidence, the construction company director slept in the house himself to prove the heating system was safe, according to Heo Ui-do, the author of “Romantic Apartment.”

The public perception of the apartment changed from nuisance to money-maker when apartments were built in the Banpo area in southern Seoul in 1971 with a development loan from the United States. People who lived in Banpo were glorified as “madame fortune” and it was chic to be a “Banpo person.”

Since then, Korea’s love for apartments has not subsided. Suh Ha-jin wrote in her novel “Model House”: “If I drink tea with my husband in such a beautiful house, it seems that my world will also become as bright as the house.” Jeon Sang-in, the author of “Crazy About Apartments,” wrote that “living in a luxury apartment has become a kind of special condition required for being part of the middle class in Korea.”

The apartment is now causing a lot of headaches for members of the middle class. They bought their apartments with money borrowed from financial companies, but have suffered a great deal of financial damage because the price of their houses bottomed out after the 1997 financial crisis. It is estimated that there are about 1.98 million so-called “house poor” households at present, according to Kim Young-je, the author of “House Poor.” For them, the apartment is not a house but a burden.

Rather than debating over whether to relax the DTI (debt-to-income ratio), the government should first find out what caused so many people to be house poor.