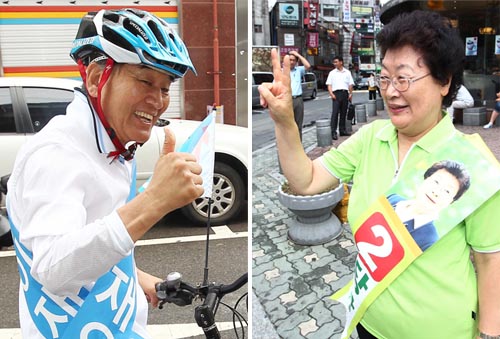 
In a last-minute maneuver to better their chances against the ruling Grand National Party in tomorrow’s by-elections, three opposition parties formed a campaign alliance yesterday to mutually support the Democratic Party’s Chang Sang in a race in Seoul’s northwestern Eunpyeong area.

According to the Democratic, Democratic Labor and People’s Participation parties, Chang, former president of Ewha Womans University, won a competition among the parties’ three candidates, and the two others have stood down. Over the weekend, the three parties conducted opinion polls about each candidate.

With yesterday’s outcome, tomorrow’s by-election to elect a lawmaker from Eunpyeong B district will be a match between Chang and Lee Jae-oh, former GNP representative and one of President Lee Myung-bak’s closest allies.

Whether Lee succeeds in making a successful political comeback is seen as a test of President Lee’s popularity.

“We will do our best to stop the right arm of President Lee from winning the election,” Democratic Party Chairman Chung Sye-kyun said.

Lee Jae-oh, 65, served three terms as a lawmaker for the GNP since 1996, but suffered a humiliating defeat in 2008 to Moon Kook-hyun, then leader of the minor opposition Creative Korea Party. Before his career in politics, Lee was a rights activist who fought against the authoritarian regimes of former presidents Park Chung Hee and Chun Doo Hwan.

Chang, 71, served as Ewha’s president from 1996 to 2002 until she left to work as prime minister during the Kim Dae-jung administration. The National Assembly, however, failed to confirm her in the job after grilling her about alleged draft-dodging by her son, who has U.S. citizenship, and allegations of real estate speculation with false addresses.

Tomorrow’s by-elections will fill eight vacancies in the legislature. Incheon, Gwangju and South and North Chungcheong provinces will also elect lawmakers, and three assembly seats will be filled in Gangwon.