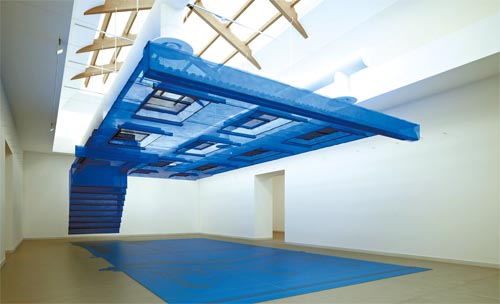 An image of “Blueprint” by Suh Do Ho and Suh Architects, which will be exhibited at the upcoming Venice Biennale. Viewers are invited to walk through the space between the blue panels. Provided by Suh Architects


Suh Do Ho, 48, unlatched the wooden gate and waved in his younger brother Suh Eulho, 46, and his sister-in-law Kim Kyung En, 38, on an afternoon last month in Seongbuk-dong.

Once inside, the three siblings stood in the picturesque yard facing the two grand hanok where the brothers had grown up, and Suh Do Ho spent a moment reminiscing about the times in 1973 when he played tag with his brother in the yard as their father and a crew of carpenters worked to finish construction of the traditional house.

On this day the brothers and Kim had returned to the property to work on a project of their own, which centers on the idea of home.

The project, called “Blueprint,” will be shown at the 12th International Architecture Exhibition at the Venice Biennale from Aug. 29 to Nov. 21. They were invited by Kazuyo Sejuma, an architect, 2010 Pritzker prize winner and the first woman to direct the event.

From left, architects Suh Eulho and Kim Kyung En and the installation artist Suh Do Ho, stand in front of the hanok in Seongbuk-dong created by the Suh brothers’ father Suh Se-ok, a traditional Korean painter. By Choi Seung-shik


The Suh brothers and Kim are the only Koreans on the list of 48 participants from around the globe. The prestigious list also includes this year’s lifetime achievement award winner Rem Koolhaas and the installation artist Olafur Eliasson.

Now a New Yorker, Do-ho is a celebrated installation artist who received his M.F.A. from Yale University. Eul-ho is a renowned architect who received his M.A. from Harvard’s Graduate School of Design. Kim Kyung En, a sculptor, is also a Harvard grad.

To create the project, the team went back to its roots.

“We thought about what we have in common and came up with the idea of ‘home,’” Suh Do Ho said, gazing at the front porch of the hanok.

While the three had worked together before, including on a recent collaboration commissioned by a Korean art collector, this project allowed them to cross artistic boundaries that had previously compartmentalized their work.

The artists compared their artistic process to “a conversation about home.” Suh started the project by suspending a silk “blueprint” - a life-sized replica of his New York townhouse - horizontally in the air. Continuing the “dialogue,” the other two then laid the outline of the “house” on the ground.

“At first glance, it looks just like a blue shadow,” said Suh Eulho. “But look closely and you will notice that there are three houses overlapping each other, making a composite shadow of the Korean hanok we used to live in, the New York townhouse where my brother lives and a conventional Venetian villa.”

Suh Do Ho interjected to comment on his partners’ work.

“The reflection was expressed poetically,” he said, referring to the irony of having such a flimsy replica of an apartment hovering over its immobile and permanent shadow as viewers walk between the two.

“Our life is like a long journey, in that we pass through many different spaces,” Suh added. “I believe that the meaning of ‘space’ can go beyond just the physical or the architectural to be a human relationship. The process of building relationships is just an overlapping of one’s space onto that of someone else’s.”

He concluded, “If one’s clothing represents his personal space, home is that space in its expanded state. For me, home is a crucial idea representing individual identity.”

Overall, the artists were pleased to find that their creation had succeeded on so many different levels.

“It was not only the finished product that was art, but the collaborative process that made our work a masterpiece,” Suh Do Ho said.

The process of defining not only the meaning of home, but also the boundaries between reality and illusion and the relationship between space and identity, was valuable albeit challenging, he said, and each of them found a way to express these ideas through the piece.