Dream of a movie gets lost in its own metaphysical musings

Dream of a movie gets lost in its own metaphysical musings 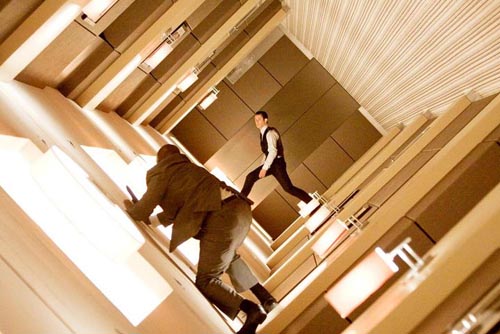 A scene from “Inception” Provided by Warner Bros. Korea

What is arguably the summer’s most ambitious film - and certainly its most confusing - has finally hit theaters, though most viewers will probably find that one trip to the multiplex is not enough to grasp the complex and multi-layered dreamworld in “Inception.”

Telling the story of an “extractor” named Dom Cobb, played by Leonardo DiCaprio, who makes his living by entering people’s dreams while they sleep and stealing their most guarded secrets, Inception offers pretty much everything a moviegoer would expect from a great film: big stars, nonstop thrills and mind-blowing special effects. Everything, that is, except for a comprehensible narrative.

This is not for lack of trying. Indeed, few movies in recent memory have spent so much time explaining themselves to their viewers, but the lasting impression of Inception is not one of revelation so much as bewilderment. Inception toys with the sometimes indecipherable line between our dreams and our waking reality - even suggesting at one point that our dreams can overtake our reality - but the film ultimately loses itself in its metaphysical musings.

The most skilled extractor in the world, Cobb is asked near the beginning of the film by a titan of industry, Saito (Ken Watanabe), to perform a reverse maneuver - implanting an idea in a rival businessman’s mind through a procedure known as “inception.” Inception, we are told, is both harder and riskier than extraction, forcing Cobb to assemble a team of highly specialized dream-manipulators with specific areas of expertise - a “monitor,” an “architect” and a “forger” among them.

In return for his service, Cobb is promised that he will be allowed to legally return to the United States - and, most importantly, to his three young children - where he is currently wanted for a crime that he may or may not have committed. As if that weren’t confusing enough, the task of inception is made even more complicated by Cobb’s deceased wife, Mal (Marion Cotillard), who emerges from Cobb’s subconscious mind at inconvenient moments to generally wreak havoc in the dreamworld.

While the film’s stunning visual effects push new cinematic boundaries, and there are undeniably more than a few instances in which the viewer will feel part of movie history in the making, Inception falls flat in the end.

Those moviegoers who are expecting a comprehensible narrative in particular should probably steer clear of Inception, though early box office returns suggest that not many people are doing so. Billed as a thinking man’s action film, Inception - which cost a whopping $160 million dollars to produce and market - had already earned $113 million at the box office through its first eight days in wide release and shows no signs of letting up.

While the film boasts big name actors, headlined by DiCaprio, it is ultimately the brainchild of its British-born writer and director, Christopher Nolan, who has vaulted to worldwide acclaim with a string of successful films, and whose signature motif has been an expectation that the viewer is more intelligent than most other Hollywood hits presume. This time around, however, he may have outdone himself, sacrificing character and intelligibility alike for the sake of layer upon layer of intrigue.

Starting with his psychological thriller “Memento” in 2000, and continuing through his reimagining of the Batman series in “Batman Begins” (2005) and the “The Dark Knight” (2008), Nolan has consistently outperformed expectations. But those expectations have risen greatly with each successive hit, leading many to compare Inception to some of the greatest sci-fi films of all time - “2001: A Space Odyssey,” “Blade Runner” and “The Matrix” - before it was even released.

Perhaps it was the weight of this expectation of greatness that is the film’s ultimate undoing. Reports out of Hollywood are that Nolan had been tossing around the idea of bringing a dreamscape picture to the big screen for more than a decade, biding his time until computer technology had caught up to his artistic vision of a dreamworld within a world.

Unfortunately, however, this ambitious vision falls victim to overreach. Where earlier Nolan films succeeded by doing more with less, Inception somehow manages to do less with more.