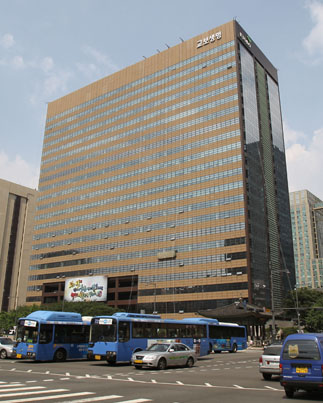 Kyobo Bookstore in Gwanghwamun could re-open as early as next month. [JoongAng Ilbo]

Kyobo Bookstore is rushing to complete a massive renovation of its Gwanghwamun branch so that it can re-open in early August, instead of on Sept. 1 as planned.

The renovation project was started in April to celebrate the store’s 30th anniversary. The new opening date has not yet been announced.

Jeong Kil-jeong, a manager of Kyobo Bookstore’s Brandpart team, explained why the gigantic bookstore decided to undertake such an ambitious renovation project.

“The entire place wasn’t keeping up with current trends and the bookshelves and other customer convenience facilities were deteriorating,” Jeong said.

The new facility will have more benches and chairs for reading and lockers for personal items.

“We want customers to have a better reading experience in the new place,” Jeong said.

There will also be space for readings by well-known authors and lectures by industry professionals after the renovations are complete. The new store will also have a new section for e-Books.

Other facilities will be announced along with the new re-opening date.

Currently, customers can buy books and magazines at a small shop set up in Gwanghwamun Subway Station.

The rest of the store’s stock is being housed at a space in Paju, Gyeonggi, until the re-opening.

Kyobo Bookstore opened its Gwanghwamun branch in 1981. This is the first renovation project the store has undertaken since a year-long remodeling project that began in 1991.

With sales of around 30,000 books per day, the store has had a significant impact on the publishing industry in Korea, and when the bookstore announced that it was undergoing a renovation, many related businesses were worried about the effect on book sales.

“People in the publishing business still come to our office to try to find ways to advance the renovation process,” Jeong said.