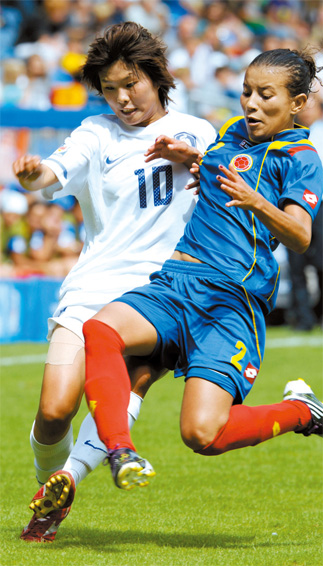 Ji So-yun battles with a Colombian defender during the third-place match of the 2010 U-20 Women’s World Cup in Germany on Sunday. Ji scored the lone goal in Korea’s 1-0 win. [NEWSIS]

The 19-year-old forward secured a place among the world’s best female players with an impressive performance at this year’s competition in Germany, showing her knack for finding the back of the net.

Ji scored a total of eight goals, including the Korean national team’s lone score in its 1-0 win over Colombia in the third-place game on Sunday. The win gave Korea its best finish ever at a FIFA-sanctioned tournament.

“The fact that Korea did so well in the tournament is a very pleasant surprise,” FIFA President Joseph S. Blatter was quoted as saying on FIFA’s Web site. “They play a very attractive brand of football and have a technically very gifted playmaker in Ji So-yun, who has really proved herself here.”

Ji also earned the distinction of becoming the first Korean player to win the silver ball award for finishing the tournament as the second-best scorer after German forward Alexandra Popp, who netted a total of 10 goals.

With an impressive combination of speed, shooting and dribbling skills, Ji scored a hat-trick in Korea’s 4-0 win over Switzerland in the team’s opening match on July 14 and contributed key goals throughout the tourney.

In addition to her impressive performance, Ji’s humble upbringing in a single-parent household has also drawn the interest of fans and observers.

“Since I started playing football, I’ve stayed in dormitories and have not been able to do much for my mother,” Ji said. “In the future, I want to provide a building for my mother complete with a housing unit, restaurant on the second floor and a jjimjilbang (public bathhouse) on the top.”

Ji got her start in organized football in 1998 as a second grader at Imun Elementary School. The manager of the team had mistaken the young Ji for a boy, handing her a recruitment flyer for prospective youth football players.

Ji started playing organized football on a boy’s team before moving onto a girl’s squad at Oju Middle School, where she met her current U-20 squad manager, Choi In-cheul.

With her performance at the U-20 World Cup, Ji has reportedly received numerous lucrative contract offers from American and German clubs.

“I will find out the details once I return to Korea, but I’ve been informed that I’ve received offers,” said Ji. “It’s been a dream of mine since high school to play in the American Women’s Professional Soccer league.

“I want to compete amongst the talented players in the U.S. league and show people that there are many talented football players in Korea.”

Having completed a successful tournament, Ji and some of her teammates will join the women’s senior team at the 2010 Asian Games to be held in Guangzhou, China in November.

Korea is considered the early favorite to win the gold ahead of North Korea and Japan.