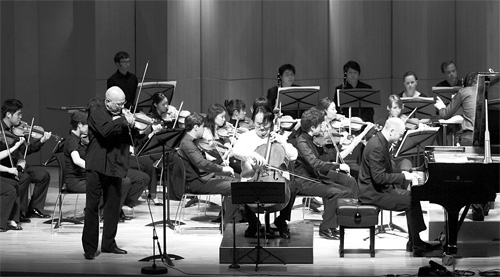 An orchestra assembled for the Great Mountains International Music Festival played as part of the Distinguished Artists Series on Saturday. The orchestra comprises the Sejong Soloists as well as members of the Metropolitan Opera Orchestra, Hong Kong Philharmonic Orchestra and Seoul Philharmonic Orchestra. Pictured in the front row, from left, are violinist Elmar Oliveira, cellist Jian Wang and pianist Adam Neiman. Provided by the organizer

PYEONGCHANG, Gangwon - The sound of instruments such as the cello, violin and flute waft on the cool breeze blowing across Alpensia Resort, a ski resort famous for its location in the town aspiring to host the Winter Olympics eight years from now.

The resort is also the new venue for the seventh season of the Great Mountains (Daegwallyeong) International Music Festival. The music is being generated by some of the 160 music students from nine countries who have been invited to the festival to participate in master classes led by acclaimed musicians from around the world and the faculty of Korea’s top music institutions.

The list of instructors includes, to name just a few: Elmar Oliveira, an award-winning violinist; Todd Phillips, a violin professor at Mannes College of Music; Lawrence Dutton, a viola professor at Julliard College; and Shin Soo-jung, a pianist and former dean at the college of music at Seoul National University.

The festival, now in its seventh year, is also a draw for classical music aficionados who want to spend their summer enjoying top notch concerts in a beautiful setting.

The highlight of the festival was the Distinguished Artists Series, featuring music by world-class artists. The series opened with “Fratres” and “Cantus in Memoriam Benjamin Britten” by Arvo Part, a modern Estonian composer. The piece was played by Sejong Soloists, the country’s leading string orchestra, which is comprised of young musicians from Korea and abroad, and conducted by Pak Jung-ho.

Saturday saw the Korean premiere of “Acrostic Wordplay: Seven Scenes from Fairy Tales” by Korean-born, Berlin-based composer Unsuk Chin. Although the piece premiered 17 years ago in London, bringing Chin global recognition, it has often been canceled before it is staged due to its complicated structure, a festival organizer explained.

The piece consists of seven scenes from the fairy tales “The Neverending Story” by Michael Ende and “Through the Looking-Glass, and What Alice Found There” by Lewis Carroll. It was played by nine different instruments including piano, flute, oboe, bass clarinet, harp and viola. Soprano Yu Hyun-ah’s performance of the delicate and demanding piece was especially commendable.

The series will continue with performances from Thursday to Sunday this week.

The festival is modeled after the Aspen Music Festival, and this year, it took a major step toward becoming more like its musical mentor. It moved from the Yongpyong Resort to the nearby Alpensia Resort, which is brand-new, and the concerts are being held at Alpensia Concert Hall, a new facility at the foot of the resort.

The 630-seat concert hall has been designed specifically for classical concerts and was modeled after the Singapore Civic and Cultural Center and a library and concert hall in Bodø, Norway, the organizers say.

“The new concert hall has raised the festival to an entirely different level. It’s magnificent,” said Ani Aznavoorian, a cellist and member of the faculty at the University of Illinois at Urbana-Champaign who has participated in the festival several times.

There are more changes to come in the future. At the festival, Kang Hyo, the festival’s artistic director since its inception in 2004, announced he would pass the baton to veteran cellist Chung Myung-wha and her younger sister, acclaimed violinist Chung Kyung-wha. The two are members of the renowned Chung Trio, along with their brother Chung Myung-whun, who is a pianist and conductor of the Seoul Metropolitan Government-run Seoul Philharmonic Orchestra.

Kang, a violinist who has served on the faculty of Yale University since 2006, told the press that his decision to step down was based on the belief that the festival could progress only when the leadership changes.

Chung Myung-wha, currently a professor at the Korea National University of Arts, said she will lay out a blueprint for the festival’s future following discussions with her sister.

“We are looking into the possibility of reconfiguring the festival with a focus on chamber music,” she said.

Chung Kyung-wha had been scheduled to lead a session called “Intimate Talk with Distinguished Artists” with festivalgoers on Sunday, but she had to cancel the event citing a personal matter, organizers said.

A myriad of festivals with the “international” tag have appeared across Korea in recent years, as the central government encouraged local autonomous governments to organize events to boost the local economy. But only a few, including the Pusan International Film Festival, have lived up to the label, experts say, since most festivals fail to include people and events that are noteworthy enough to lure people from other cities, let alone those from abroad. Against this backdrop, the Great Mountains festival is a distinguished exception.