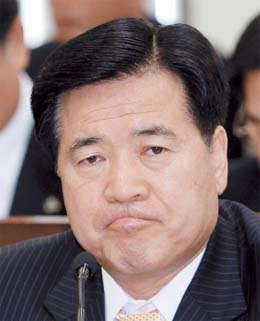 The nation’s police chief said yesterday that he would quit, after a series of embarrassing cases of police bungling.

“I believe now is the best time for me to step down,” Kang Hee-rak, 58, said in a statement released yesterday afternoon, “because my resignation will help the president to form a new lineup for the second half of the administration and because the police agency is stable.”

Kang is expected to tender his resignation to the presidential office today.

Although Kang apparently stepped down voluntarily, political observers say he was actually forced to resign. “There were some embarrassments involving the police recently, and Kang appeared to have felt responsible,” said a Blue House official. “His performance was also not received positively in the Blue House. I understood that replacing the national police chief was decided in order to revamp the conditions in the force.”

While Kang did not mention them in his statement, a recent series of police blunders has fueled public outrage over mismanagement and abuse of power.

Last month, five police officers at the Yangcheon police precinct in western Seoul were indicted on charges of torturing at least 22 people suspected of petty crimes to force confessions. During Kang’s term, a series of child sex crimes took place nationwide, fueling public dissatisfaction in the police. In another case, a female college student was kidnapped and killed and might have been saved if the Daegu police hadn’t bungled the case.

One policeman staked out at the student’s home fell asleep after drinking alcohol. In early July, Chae Soo-chang, a superintendent of the Gangbuk police precinct in Seoul, called for the resignation of the Seoul police chief for mismanagement.

Since then, five chiefs were appointed, but only one completed his two years. Kang was named commissioner general in March 2009, and he was supposed to serve until February.

Kang, a graduate of Korea University who passed the bar examination in 1984, began his career with the police in 1988. Before heading the police, Kang was commissioner general of the Korea Coast Guard.

He took charge of the agency when the police were suffering from low morale in the aftermath of a public outcry about a crackdown on squatters in Yongsan in January 2009.

Five squatters and one SWAT member were killed in a fire during the eviction, and the police were criticized.