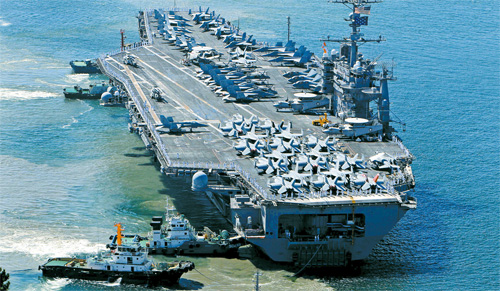 The USS George Washington in Busan on July 27. The Pentagon said Thursday the carrier will be in a joint drill in the Yellow Sea. By Song Bong-geun

Ignoring China’s protests about large-scale military maneuvers near its shores, U.S.-South Korea joint military exercises in the Yellow Sea in the next few months will include a nuclear-powered aircraft carrier, the Pentagon said.

“The USS George Washington will exercise in the Yellow Sea, in the West Sea,” Pentagon Press Secretary Geoff Morrell told reporters in Washington Thursday, “but I don’t have for you yet dates when that exercise involving that aircraft carrier will take place.”

The U.S. Defense Department said future drills, designed to rebuke North Korea for the sinking of a South Korean warship in March, will take place on both sides of the peninsula. The first of the exercises took place from July 25 to 28 in the East Sea and the USS George Washington aircraft carrier took part.

The drill was the largest naval exercise ever for the two allies since the end of the Korean War, and 20 warships, including the nuclear-powered aircraft carrier, 200 aircraft and 8,000 servicemen were mobilized.

Morrell made clear that the drills are a show of force to Pyongyang. The North “should not feel in any way threatened by these exercises, while at the same time it should be very, very clear that further military action will not be tolerated,” he said.

China was not happy about the U.S.-South Korea drill in the East Sea last month, and the People’s Liberation Army of China conducted its largest ever missile firing exercise near the Yellow Sea on July 25. China Central Television reported that the large-scale, long-range rocket drill was a response to the U.S.-South Korea exercise.

Since China’s complaint about U.S. arms sales to Taiwan earlier this year, relations between Washington and Beijing have gotten prickly, especially after China refused to join the international community in blaming North Korea for attacking the South Korean warship Cheonan in March.

Last week, a senior Washington official said China’s reluctance to blame Pyongyang is one of the reasons for the big military drills. “China is suffering the indignity of exercises close to its shores, and though they are not directed at China, the exercises are a direct result of China’s support for North Korea and unwillingness to denounce their aggression,” Deputy Secretary of State James Steinberg said during a conference in Washington.

Matching the deepening friction between Beijing and Washington, tensions between the two Koreas have escalated this week as the South began its own massive exercise in the Yellow Sea despite the North’s threat of “strong physical responses.”

The annual joint Ulchi Freedom Guardian exercise of South Korea and the U.S. will take place between Aug. 16 and 26.