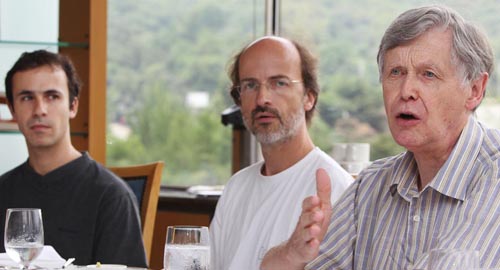 
When Koreans think of Belgium, waffles are likely the first thing that come to mind since outlets serving what has become the dessert of the moment have been sprouting like mushrooms in recent years. But the country has a rich cultural heritage.

In an effort to highlight its music, the country is hosting the Euro Asia Chamber Music Festival, which kicks off today at the Goethe Institute in central Seoul. The festival celebrates various occasions, including the country’s Presidency of the Council of the European Union and the 60th anniversary of the Korean War. Belgian soldiers fought alongside Koreans in the war that lasted until 1953.

“Everywhere I have been dispatched so far has involved music. Bridging the cultural gap between countries has always been part of my job,” said Pierre Clement Dubuisson, the ambassador of Belgium to Korea, in a press conference last Thursday. “This year is especially important for the relationship between the EU and Korea - the EU-Korea free trade agreement, the Asian-European Meeting in Brussels in October and the G-20 summit in November. We also want to have young European musicians come together with Korean musicians.”

The week-long festival features the Euro-Asia Chamber Music Players, a group of 36 young musicians from EU member countries along with a handful of Korean musicians. Didier Poskin, an acclaimed Belgian cellist, will be supervising the orchestra. The Europe-based Quartz Ensemble will also perform during the festival period in a concert featuring eight European and Korean works.

The opening concert features pieces by Mozart, Brahms and Weber. The concert on Tuesday, entitled “Virtuoso,” features works by Servais, a Belgian musician and one of the most influential cellists of the 19th century, and Chopin. The Wednesday concert will focus on modern music and the Thursday concert features music from the classical and romantic period.

The last three concerts - on Friday at Yongsan Art Center, on Saturday at Catholic University of Korea in Bucheon, Gyeonggi, and on Monday at Goyang Aram Nuri Arts Center in Goyang, Gyeonggi - will have the same program, with music by Dvorak, Lekeu, Debussy and Ravel.