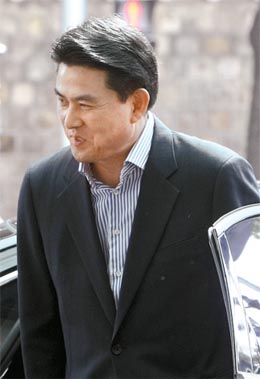 The opposition Democratic Party said it would bring up bribery allegations concerning Kim Tae-ho, the prime minister-designate, at his confirmation hearing, which was scheduled yesterday for two days starting Aug. 24.

“Kim had been investigated for his alleged involvement in the Park Yeon-cha scandal,” said DP Rep. Won Hye-young in a radio interview yesterday. “The opposition party will get to the bottom of the allegations at the confirmation hearing.”

Kim, who served as South Gyeongsang governor from 2004 until early this year, was implicated last year in the sweeping political bribery scandal involving Park, the Taekwang Industrial chairman.

Prosecutors questioned Kim last year over allegations that he had received bribes from Park, but no indictment was filed because a key witness in the case could not be found.

Park, who headed a Busan-based shoemaking company, confessed that he bribed officials in both the Roh Moo-hyun and Lee Myung-bak administrations and is now in jail after being convicted of bribery and tax evasion.

The probe was suspended after former President Roh committed suicide after being questioned by prosecutors.

When the Supreme Public Prosecutors’ Office announced the results of its investigation in June 2009, which indicted dozens of influential people, Kim was not included.

The prosecution said at the time it would “continue investigating allegations involving Kim,” then the South Gyeongsang governor.

“Because a person suspected of delivering bribes to Kim is not in the country, we could not complete our probe,” Hong Man-pyo, a senior prosecutor in charge of the investigation, said at the time.

Kim was accused of receiving tens of thousands of dollars from Park in April 2007, and the prosecution suspected that the delivery of the bribe took place at a Korean restaurant in New York City. Park told prosecutors he preferred giving bribes in dollars at locations outside of Korea.

Prosecutors obtained testimony from Park saying he had asked the restaurant owner to hand over the money to Kim.

The prosecutors suspected that Kim received the money in return for granting approval for Park’s country club development project.

Kim was summoned and questioned by the prosecution on June 9 last year, but denied the charges. He said the permit to build the country club was granted by his predecessor and he never accepted money from Park.

While the restaurant owner told the prosecution that he had ordered a waitress to deliver the bribes to Kim, however the waitress could not be found, forcing prosecutors to suspend the probe.

Gangwon Governor Lee Kwang-jae and Democratic Party Rep. Suh Gab-won were indicted on charges of receiving bribes from Park through the same New York restaurant owner, but both were acquitted last year.

Following the acquittal, the prosecution decided to drop the case against Kim because there were not sufficient grounds to continue the probe.

The DP has assigned four senior lawmakers, including Rep. Park Young-sun, to participate in a special committee in charge of the confirmation hearing, with DP floor leader Park Jie-won to advise on the questioning of Kim, DP officials said.