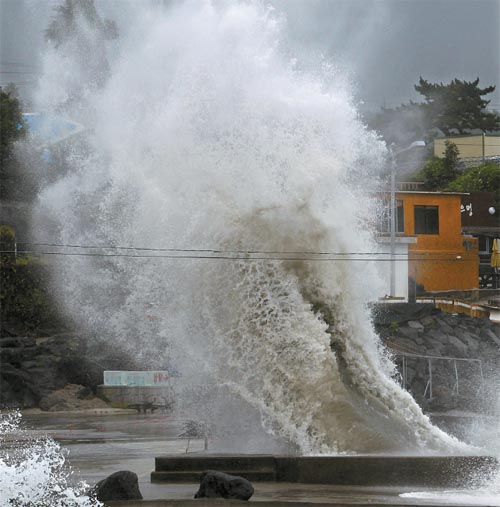 A wave caused by Typhoon Dianmu hits a pier at Seogwipo, Jeju Island, yesterday. The typhoon is expected to land on the region of Yeosu, South Jeolla, this morning. [YONHAP]


Typhoon Dianmu (the goddess of lightning and thunder) is expected to land in the region of Yeosu, South Jeolla, this morning, the Korea Meteorological Administration has forecasted.

It has been three years since a typhoon last landed on the Korean Peninsula when Typhoon Nari caused extensive damage on Jeju Island and South Jeolla in September 2007.

Typhoon Dianmu is expected to exit the Korean Peninsula tomorrow at dawn, passing through Pohang, North Gyeongsang, as it heads to the East Sea.

The weather agency issued warnings against high waves and heavy rainfall that will be caused by Typhoon Dianmu for the southern coastal regions and Jeju Island.

The size of the typhoon will diminish in intensity as it moves north.