A day after Japan’s apology, ambassador looks to bright future

A day after Japan’s apology, ambassador looks to bright future 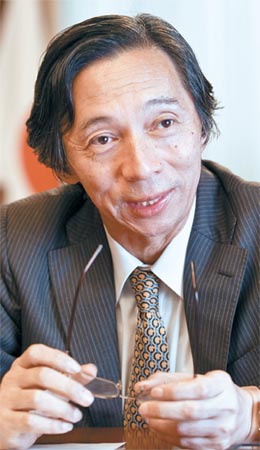 “I am the last ambassador of the past century of Japan-Korea relations, and the first ambassador opening up a new century,” said Masatoshi Muto, Japan’s new ambassador to Korea. “Building a new future is a joint task for the two countries, and I want to play the role of a bridge.”

Muto, who spent years in Korea on three previous assignments since 1975, spoke easily in near-perfect Korean during his interview with the Joong-Ang Daily yesterday in his office. It was the first media interview for the ambassador, who arrived here Aug. 5.

“I hope [shuttle diplomacy] is used as quickly as possible and the two leaders issue a joint statement for the next century,” he said. “When an official visit takes place, such developments may be seen.

“We often say Korea and Japan are close, and yet distant,” said Muto. “But the bilateral relationship has grown stable and mature, and this was possible because the two countries’ peoples understood each other, liked each other and became friends.”

For the next century, Korea and Japan will need to deepen and widen people-to-people exchanges, he said. “Still, there are not that many people, surprisingly, who have in-depth knowledge about both countries,” Muto said. “The time has come to nurture more such people.”

He continued to emphasize the importance of meetings between scholars, youth, residents of sister cities and officials at non-governmental groups and companies, adding that the future will be forged from civilian cooperation, not government-led initiatives.

Muto also eagerly anticipated a Korea-Japan free trade agreement. “I am aware of the concerns of Korean companies,” he said. “But I witnessed the rapidly strengthening power of Korean companies in the past during my service as Japan’s ambassador to Kuwait.

“Korean companies are not weak,” he said. “When the two countries’ companies compete in a fair market, Korean companies will become even more competitive. This will be an opportunity to strengthen manufacturing industries.” Muto added that the FTA would be a framework to ensure free and fair competition.

He also stressed the importance of bolstering cooperation among Tokyo, Seoul and Washington in maintaining peace and stability in Northeast Asia, calling consistent coordination between the three countries the key to Japan’s North Korea policy.

“Over the past few years, Korea rose actively in the international community, and we welcome this emergence,” he said. “As a member of the Northeast Asian region, we feel reassured to have Korea as a partner. There are many issues that we can cooperate on such as nuclear nonproliferation, regional security and Afghanistan as well as environmental matters. Japan is thrilled to have a great partner in Korea.”