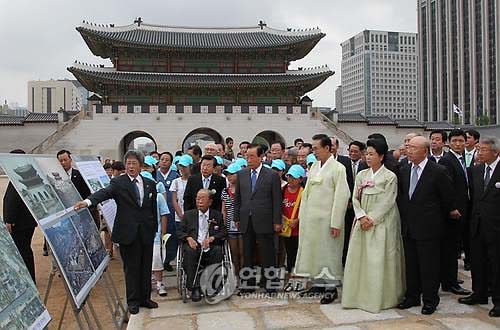 South Korea on Sunday celebrated its liberation from Japan's colonial rule 65 years ago, unveiling the newly restored Gwanghwamun, a royal palace gate and the nation's landmark that fell into disgrace during the occupation.

Gwanghwamun, the main gate to Gyeongbok Palace in central Seoul, was revealed to the public on Liberation Day after a four-year restoration that has kept it hidden from view. Its long-lost nameplate was also restored and put back on the gate's facade. 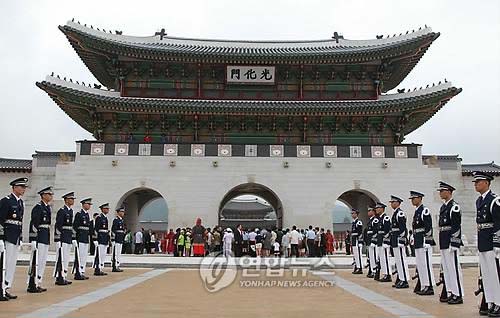 "We can now see Gwanghwamun standing tall here once again, restored to its past glory," Lee said in his speech at the ceremony for the 65th anniversary of Liberation Day at Gwanghwamun Square in front of the palace gate.

"Gwangwhamun was blocked and neglected, and the flow of our national spirit was choked off," he said, adding, "We incessantly endeavored and struggled for the country's independence." 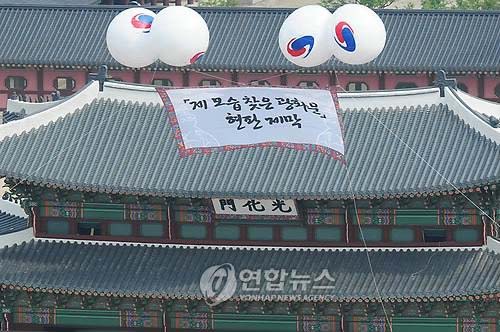 Gwanghwamun was constructed in 1395 as part of nation building by the nascent Joseon Dynasty, but was destroyed during the Japanese invasions in the 1590s, during which a large swath of the nation was burned to ashes. It took a long time for the Joseon dynasty to resuscitate, and the palace and
gate were finally reconstructed in the 1860s.

But soon after, Japan, which had absorbed Western modernization more quickly than any other Asian country, colonized Korea. Inside the royal palace, Japanese assassins killed Empress Myeongseong of the Joseon Dynasty, and in 1910, the island nation formally annexed the country.

While demolishing scores of palace buildings to make space for its governor-general office, Japan moved Gwanghwamun from the front of the palace into the northeastern corner.

Although colonial rule ended with Japan's defeat in World War II in 1945, the royal gate was once again destroyed during the Korean War.

An early restoration attempt in the era of industrialization in the 1960s ended incomplete and failed to return the gate to its proper place.

Yet, 50 years later, the restored Gwanghwamun was unveiled on the anniversary of independence so Koreans "can reflect more deeply on the meanings of the forced annexation by Japan," the Cultural Heritage Administration, which led the restoration, said earlier.

Some 4,500 officials, patriotic figures, foreign diplomats, civic leaders and citizens attended the anniversary ceremony. About 1,000 youth put on various performances, with 200 children of interracial marriages among them, in reflection of the growing number of mixed marriage families in South Korea.

For many elderly Koreans, the restored royal gate shows Korea's growing prowess after tribulations of colonial rule and war.

"I'm so proud of our country," said Park Geun-su, 74, who traveled from the central town of Cheongju early in the morning to watch the ceremony.

"When we were little, we lived under their (Japanese) suppression. People didn't dare to go out when a Japanese policeman walked by. Any word about
them made little children stop crying instantly."
Choi Won-hyu, 79, felt relieved to watch his grandfather and three other relatives being posthumously honored as independence fighters at the ceremony.

"I think this will relieve some of their long-held feelings, like it does mine," he said.

People from younger generations such as Moon Sang-seon, 38, were perhaps less emotionally affected, but feel Japan has to do more to make up for its past militarism. The recent apology by Japanese Prime Minister Naoto Kan didn't fully atone for its wrongdoings, he said.

"With those issues like sex slaves and spirited artifacts unresolved, Japan doesn't feel like a partner yet," Moon said. [Yonhap]