Ballet festival reaches out to new fans with aplomb

Ballet festival reaches out to new fans with aplomb 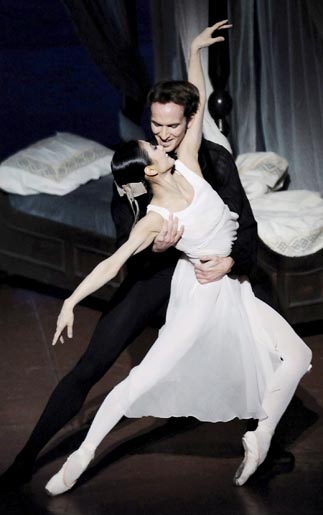 Ballerina Kang Sue-jin of the Sttutgart Ballet and Jiri Jelineky, who joined the National Ballet of Canada in January 2010, perform together. Provided by International Performing Arts Project

The Seoul International Ballet Festival begins this Friday. But on the occasion of the 30th anniversary of the Korea Ballet Association, the festival will be more than just a series of traditional performances in stuffy theaters - it will take ballet to the streets of the city, enticing passersby with leaps and twirls, and will even attempt to address a crisis facing the modern medium.

There’s no shortage of world-famous Korean stars to participate in the weeklong event: Kang Sue-jin of the Stuttgart Ballet; Seo Hee, who recently debuted as the first Korean soloist in the American Ballet Theater; and Park Sae-eun and Kim Ki-min, students at the Korea National University of Arts who won first place at the International Ballet Competition in Varna in the women’s and men’s categories, respectively, early this month. A complete performance of “Don Quixote” by award-winning ballerinas from Korea and soloists of the famed Mariinsky Ballet in Russia will also grace the Seoul Arts Center stage.

But the most exciting parts of the festival will be the opportunities to look behind the curtain. The art director of Russian Bolshoi Ballet Yuri Burlaka will speak in a seminar about Bolshoi’s restoration works of “Paquita,” “Esmerelda” and “Le Corsaire” - the last of which was mounted by the Bolshoi in 2007 as the most expensive ballet production ever.

“There are many interpretations of ballet moves, but they are all rooted in Russian ballet,” said Moon Young, a professor at Kookmin University and vice chairman of Korea Arts and Culture Education Service Dance Division, one of the supporting organizations of the event.

But the festival is not only a celebration - it’s also a call to action. Although many local ballerinas today have won international acclaim, there are few to no Korean choreographers capable of developing new ballet works to challenge these performers. Even overseas, the number of truly great ballet choreographers seems to be at an all-time low.

“We have more than enough outstanding ballerinas going overseas, but no Korean ballet pieces that match the fame earned by these ballerinas,” explained Moon.

Part of the reason is a lack of education about the creative foundations of the form, the organizers say. To rectify the situation, the festival also offers workshops with professors from the Vaganova Academy of Russian Ballet on basic acting and character development skills. The academy, located in St. Petersburg, is one of the oldest and most prestigious of its kind. Founded in 1738 as the Imperial Ballet School, it is associated with the Mariinsky Ballet.

If you’d prefer not to solemnly ruminate on the future of ballet, perhaps you’d appreciate a little dance under the open sky in front of the fountain next to the Opera Theater at the Seoul Arts Center. The Korean Ballet Association is hoping this outdoor event will encourage new fans to attend an indoor performance, or perhaps one of the other festival events.

Elsewhere, at the Seoul Arts Center Visual Art Archives, film versions of famous ballets will be screened, accompanied by commentary from amateur and professional ballet experts for those just getting a grasp of the medium.

This is the second Seoul International Ballet Festival. The first was held two years ago, but it was labeled an “expo” instead. This time, officials thought “expo” sounded too serious and might discourage amateurs from attending. Organizers, this time around, tacked on the word “festival” to make the event sound friendlier.

To reach out to people who are not yet diehard ballet fans, the organizers will also hold several performances outside Seoul, bringing Kang Sue-jin, Seo Hee and many other prominent ballet dancers to local theaters in Ulsan and Pohang, North Gyeongsang.