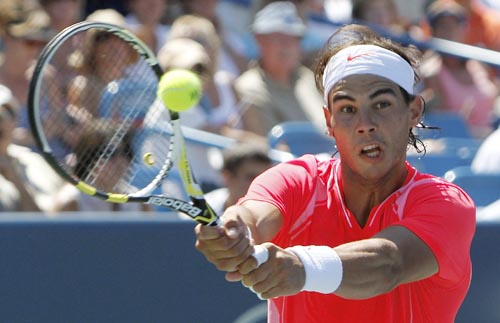 Rafael Nadal of Spain hits a return to Taylor Dent of the U.S. during the Cincinnati Masters tournament on Wednesday. [REUTERS/YONHAP]

Reigning Wimbledon and French Open champion Nadal advanced with a 6-2, 7-5 victory over big-serving 83rd-ranked American Taylor Dent to reach the third round of the $3 million hard court event, a tune-up for the U.S. Open. “I was waiting to have my chances, but you are out of the rhythm from the baseline because he’s not giving to you the long point, and it’s difficult to have the feel of the ball,” Nadal said.

“He broke me and I was a little bit lucky after that to have the break. It was a close second set but I think I had more chances than him in the second. It was closer in the second but I still think I deserved to win.” The Spaniard, who has won 35 of his past 37 matches, will next face Frenchman Julien Benneteau, who eliminated Swiss Stanislas Wawrinka 6-4, 6-2.

“I know him. He knows me. It’s going to be a very difficult match,” Nadal said. “He’s playing well. I’m going to try to play my best tennis, only like this, I’m going to have chances. I have to be aggressive and try to have control of the point.”

The Scotsman defeated Nadal and Federer in his last two matches in Toronto to claim his first title of the year, but had some trouble putting away Chardy.

“He started playing a lot better,” Murray said. “At the end of the second set, he started going for everything. When he started making some shots, I was a little uncomfortable.”

Chardy fired 15 aces at Murray, who responded with eight of his own and denied the Frenchman on 3-of-4 break chances while capitalizing on 6-of-14 such opportunities to advance after two hours and nine minutes.

Federer advanced when Uzbek qualifier Denis Istomin suffered a right foot injury and retired after only 28 minutes with 16-time Grand Slam champion Federer leading 5-2. The Swiss star was happy for a short night after his run to the final at Toronto.

“If there is a right timing for this, it’s now, I guess,” Federer said. “It gives me an extra day to get into it. From that standpoint, it’s good.”

Djokovic defeated compatriot Viktor Troicki 6-3, 7-5, but was unhappy at how he closed out the match.

“I did have a decrease of the level in the second set,” Djokovic said. “It was a very ugly set with a lot of errors on both sides, a lot of double faults. I was struggling to hit the ball really well. In the important moments when I needed to break, I did. It’s good to go through in straight sets.”

Djokovic, runner-up here the past two years, will next face Argentina’s David Nalbandian, a winner two weeks ago at Washington. The South American trailed 4-5 when American John Isner retired with a right ankle injury. The Serbian star continues to work on his serve, which was a major weapon in his run to his lone Grand Slam crown at the 2008 Australian Open.

Swedish fifth seed Robin Soderling defeated Australian Lleyton Hewitt 4-6, 6-3, 7-5, while American Andy Roddick, coming off a bout with mononucleosis, downed Dutchman Thiemo De Bakker 7-6 (7/4), 6-4. Roddick never faced a break point, winning the last four points of the tie-breaker and taking the only service break of the match in the second set to advance.