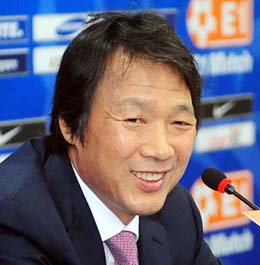 National team manager Cho Kwang-rae announced his 23-man roster for the Sept. 7 friendly against Iran yesterday and another new name was added to the roster. Gyeongnam defender Kim Ju-young was selected to the squad for the first time and veteran midfielder Kim Do-heon makes his return after a seven-month absence.

Aside from the 14 overseas-based players announced last week, Cho added nine more domestic players to round out his roster. With the 2011 Qatar Asian Cup approaching in January, Cho is looking to bolster his roster by encouraging competition among several players and add one to two young players per each position for the 2014 Brazil World Cup.

With 10 defenders and nine midfielders on the 23-man squad, Cho has decided to test out midfielders and defenders in the upcoming game against Iran. One of the more fierce competitions will be for the two central midfield positions.

“Kim Jung-woo will need to compete with Kim Do-heon for a spot in the midfield,” Cho said at the press conference yesterday.

“Ki Sung-yueng and Yoon Bitgaram will also need to battle for a starting spot. All four players are intelligent and well-skilled.” 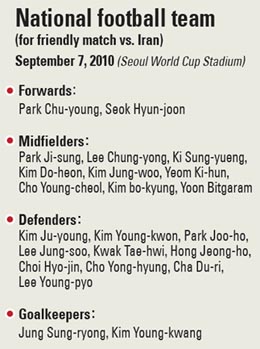 Kim Ju-young, 22, is a young defender with the potential to start in Cho’s three-back defense in the future. Recruited by Cho during his tenure with Gyeongnam FC, Kim made his debut with Gyeongnam in March of last year. Kim started 21 games in his rookie season and has started in 23 games so far this season. Kim is versatile but his biggest asset is his natural physical strength. Listed at 184 centimeters (6 feet 1 inch) and 80 kilograms (176 pounds), Kim boasts a 11-second mark in the 100-meter sprint.

“Kim Ju-young is not a polished player at this point,” said Cho. “But the national team lacks a quick central defender like Kim at this point. We can definitely use a player like Kim if the opposing team decides to go with a quick forward.”

Although Cho decided to select two forwards - Park Chu-young and Seok Hyun-joon - it’s not lost on Cho that he will need to cultivate some young talent up front as well.

“I’m worried about the lack of reserve center forwards on the squad,” said Cho. “I want to give opportunities to two to three young players with the 2014 World Cup in mind. I selected Seok to determine if he has the potential to develop into a good player in the future.”

On defense, there is speculation that Cha Du-ri will compete with Choi Hyo-jin for the starting right fullback position but Cho will likely use a platoon system in which he rotates the two in the starting 11 depending on the style of the opposing squad.

“We need at least two players per each position,” said Cho. “If the opposing team is physically strong and boasts a lot of speed in its lineup, we will need Cha. If we need to go with an attack-minded strategy, Choi would be a more suitable option.”

The Taegeuk Warriors will host Japan in its final tune-up match before the Asian Cup on Oct. 12.