And to my dear son, I leave my blog

And to my dear son, I leave my blog 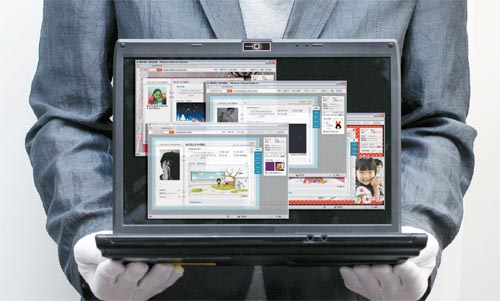 Since her son died early last month it has become a daily routine for Yang, a housewife in her 50s in Cheonan, South Chungcheong, to visit the blog he used to run at Cyworld, a social networking site, and weep. A day before he died in a car accident, Yang and her son had fought. A university student, Yang’s son removed his mother from his Cyworld friends list and rushed out of the house. Hours later, he was found dead.

Since she is no longer on her son’s friends list, she can’t browse the pictures and posts on his blog that are for friends-only. She has asked the Cyworld call center for her son’s ID and password but have been rebuffed. It’s the policy of the site’s operator, SK Communications, never to transfer control of the content of a “minihompy,” its name for subscribers’ personal home pages, to a third party - no matter what. If a user passes away, all his or her family members can ask for is to have the site deleted.

Yang says she can’t bring herself to do that, giving up the photos, videos and messages her son posted online.

Yang’s son is one of tens of millions of deceased people who still remain alive in cyberspace. Cyworld, which launched in 1999, reportedly has 25 million accounts. Naver, the nation’s biggest portal, has opened 19 million blogs since it started offering the service in 2003. At Daum Communications, 5 million blogs have been started in the past six years.

Yet only a small number actually shut down when their users die. In the first seven months of this year Cyworld received only 27 requests from families or friends to shut down a blog because of a user’s death. Daum recorded only three such requests. 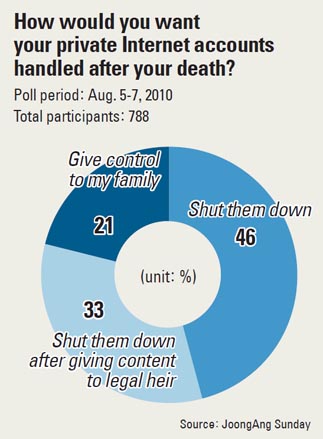 The nearly 49 million blogs at Cyworld, Naver and Daum mean that there is almost one for every person in South Korea. According to the state-run Statistics Korea agency, 246,000 people died here in 2008. Among them were 30,000 people between the ages of 20 and 40 - the demographic with the highest rate of Internet use. Since many netizens subscribe to all the services separately, that means up to 30,000 “ghost blogs” appear for that age group every year on each of Korea’s top three portals.

Many bereaved families like Yang are barred from accessing their deceased loved one’s private Internet spaces. Regulations vary among local portal operators, and no legal system has yet been established to handle the issue, even in the world’s most wired country. Critics and ordinary citizens alike have called for a social consensus on dispersing these “digital assets” after death.

In a Web survey of 788 people by the JoongAng Sunday from Aug. 5 to 7, asking what they would want to happen to their blogs after they die, 46 percent answered that they want their Web portal accounts and the content on them to be removed completely. One third said the accounts should be removed, but the content could be handed over to their families. Twenty-one percent said their families and friends should inherit control over their sites.

Choi Anna, a 32-year-old female office worker, belonged to the first group. “Having the Web postings I made in private looked at is the same as disclosing everything in my head. I would never want anyone - even my closest siblings - to see the secret journal I have kept on my blog.” (Many blogs on Korean social networking services are private, with access limited to close friends.)

Regardless of what their wishes were before death, some dead celebrities’ minihompys remain charnel houses in cyberspace for their fans and families. The blog of Choi Jin-sil, an actress who committed suicide in October 2008, is visited by hundreds of Internet users per day, according to its visitor counter. Her daughter and close friends still post messages on the site saying they miss her.

The same is true for Kim Daul, a Korean-born supermodel who committed suicide in Paris last November, as well as deceased actor Choi Jin-young, singer Yuni and actress Chung Da-bin.

Current regulations at portals and social networking sites stipulate that blogs can be removed if the families submit a copy of a state-issued death certificate. However, most families find it a troubling prospect to end the online lives of loved ones. The majority of blogs are left untouched in the end.

“The personal blogs of the dead may remain a cherished space of memorial for their surviving family members or friends, although the sites may break their hearts, making them reluctant to visit in the short term,” said Park Jong-min, a professor of mass communication at Kyung Hee University.

Hwang Sang-min, a professor of psychology at Yonsei University, said, “The meaning of death has changed in this highly developed information society from its meaning in a traditional agricultural society. We may have a brand-new culture of commemorating the dead in the near future.” 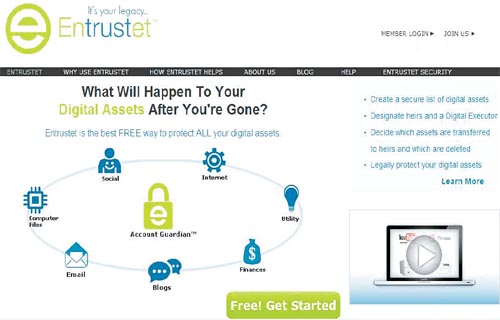 
According to Seo Yong-seok, a policy analyst at the state-run Korea Institute of Public Administration who specializes in future strategy, one middle ground would be to store all the digital data we leave behind. “We can imagine a future in which our descendants take a look around the blogs of their ancestors on the anniversaries of their deaths - just as people visit their tombs today.”

Under the current law to “encourage the use of information communication networks and protect information,” portal operators are barred from providing members’ login information to any third party without their express permission - even if that party is a surviving family member. But rules governing blog content differ according to site operators.

“We may remove the account if the families of the dead request it,” SK Communications, which runs Cyworld, said. “But since the civil law stipulates minihompys should exclusively be controlled by the account owner, no third person can inherit control over the sites.” That means even family members cannot take over control of the photos and memos left online.

Daum Communications has a similar policy. If the site verifies the death of a subscriber through his or her family, the dead subscriber’s account can be removed if requested. But heirs cannot inherit the ID and passwords of the dead, nor are they allowed to log on using the account.

The nation’s largest portal, Naver, on the other hand, is relatively less strict. NHN, operator of Naver, says it never provides the ID and passwords of dead subscribers. However, it will back up the content the deceased posted and transfer the data to the bereaved. “If the death is verified and if the families demand it, we remove the entire content of the blog and the account,” said Yoo Hanna, a spokeswoman of NHN.

Since portal operators have different policies, some families often raise questions about why some sites allow the transfer of blog content whereas others don’t.

“Discussions on reconciling our policies on the digital legacies of the dead are currently underway,” said Chung Ji-eun, a spokeswoman with Daum Communications.

Some lawmakers are also working to enact laws on digital assets. National Assembly member Park Dae-hae of the ruling Grand National Party has proposed that the law be reformed so that the deceased’s spouse, parents, offspring and a designated third person may be given the authority to manage their minihompys or blogs.

To prevent abuse, he also proposed that anyone who took advantage of the blogs of the dead for financial gain or for other ulterior motives should be subject to a prison term of five years or less, or a fine of up to 50 million won ($42,300). “After gathering more opinions through public hearings and discussions in November, we intend to have the bill passed in the National Assembly early next year,” said Representative Park.

In some Western countries, enterprises protecting members’ digital assets are already in operation - partially as a result of the legal battle in 2005 between the father of Justin Ellsworth, a U.S. marine killed in Iraq in late 2004, and Web portal Yahoo! over the dead soldier’s e-mails.

The father pleaded with Yahoo! for access to the e-mail account, hoping to find Justin’s last words, along with his photographs and thoughts from Iraq. After months of fighting in court, Yahoo!, which originally refused the family’s request, handed over a CD containing more than 10,000 pages of material in Justin’s account. But his father later told the media that he found only the e-mails his son had received and nothing he had written.

The Madison, Wisconsin-based Web site Entrustet was established in the aftermath to prevent such an event from arising again. It says it aims to “address the need to integrate online assets such as e-mail, banking and investment accounts, photos and videos, and online memberships into legally endorsed estate plans.”

The two-year-old site’s free software, Account Guardian, allows people to create a secure list that can be updated with all of their important digital assets, delineating what should be done with them after their deaths - either having them passed on to an heir or deleted by the executor. Sites such as the San Francisco-based www.legacylocker.com and www.datainherit.com of Switzerland offer similar services.