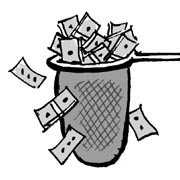 In the 17th century, King William III of England imposed an additional tax on the wealthy to help fund the cost of war. The tax, strangely enough, was tied to the number of windows on each home. At the time, having a fireplace in the house was a symbol of wealth, as most people opted for relatively sealed structures to keep in heat during the cold winters. Homes with fireplaces, however, typically had plenty of windows. The owners could afford the luxury because the fireplaces heated their homes in the winter, even though cold air seeped in through the window areas.

Although the fireplace signified wealth, it was difficult for the government to confirm whether homes had a fireplace or not, as it would take a tremendous amount of energy and time to check each dwelling. Therefore, King William III decided to impose a tax based on the number of windows on each home - the so-called “window tax.” After the window tax was introduced, some people sealed off their windows to avoid having to fork over extra money.

It reminds me of the type of taxes on the wealthy we see today. In a modern state, the purpose of imposing taxes specifically on the rich is to ease inequalities in the distribution of wealth. But these types of taxes can create unintended side effects. France, which levies relatively high taxes on wealthy people, is a prime example. In 2008, Alain Ducasse - regarded as one of the best chefs in France - fled his homeland and became an exile in Monaco to escape these taxes. Two years earlier, French singer Johnny Hallyday, who sold more than 100 million albums, fled his homeland to become an exile in Switzerland for the same reason. And then there’s the case of Swedish businessman Ingvar Kamprad, chairman of IKEA, the world largest furniture retailer. Fed up with Sweden’s taxes on the wealthy, he siphoned a chunk of his wealth to an overseas fund.

This type of tax creates what’s called the “Robin Hood effect,” named after the famous outlaw of British folklore. Robin Hood robbed rich people and then distributed the spoils to the poor. But, according to some modern-day economic scholars, Robin Hood would have actually made the poor worse off, because the well-heeled merchants would have moved to other places to protect their wealth. That would have driven up prices, as there would be fewer people who could afford to open and operate stores.

Chung Dong-young, an adviser to the Democratic Party, proposed a tax on the wealthy the other day. He estimated that the government could generate 10 trillion won ($8.37 billion) in additional funds per year with a tax on the top 0.1 percent of Korea’s earners. The tax is based on the idea that members of a community all share financial burdens collectively. But it’s not right to demand that rich people pay more taxes without a valid reason. We now risk implementing the modern-day version of the window tax.