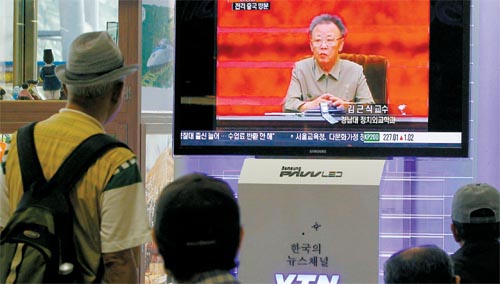 The South Korean government was baffled by the sudden trip, and analysts could only speculate that Kim was trying to get immediate Chinese approval for his youngest son to be named his heir apparent, or to secure urgent aid from Beijing for his crisis-hit economy.

The South Korean government confirmed that Kim’s private train carrying Kim crossed the border into China yesterday, only three months after a meeting with Chinese leader Hu Jintao in Beijing.

“We detected Kim Jong-il’s private train passing through the border with China late Wednesday night,” said a key government official, requesting anonymity over the sensitivity of the issue. “We are still trying to grasp the purpose of the visit and whom Kim will contact during it,” the official said.

The official said that Kim deviated from his ordinary route to China, from Shinuiju in North Pyongan province to Dandong in China’s Liaoning province. Yesterday, Kim was detected to have gone through Manpo in Chagang province and Jian in China’s Jilin province. Kim’s usual route has been hit by floods.

Carter arrived in Pyongyang Wednesday afternoon on a mission to win the release of Aijalon Mahli Gomes, a U.S. citizen detained in the North for seven months for illegal entry, and met Kim Yong-nam, North Korea’s No. 2, later that night, North Korea’s official Korean Central News Agency said. Whether he met Kim Jong-il was not reported.

A KCNA report released Wednesday evening showed Kim touring a cornstarch factory in Pyongyang, which made local media presume he was there that evening.

Carter was expected to bring Gomes home yesterday. A government source said Carter extended his visit to the North by one more day.

Kim’s visit to China was much more secret than in the past. For previous visits, extensive security measures in the border region with China signaled his departures weeks or months in advance. No such security measures were detected this time. Before May, Kim had visited China in 2000, 2001, 2005 and 2006.

Another government source said there were signs that Kim Jong-un, the youngest son of the “Dear Leader,” may have accompanied his father, which supports speculation that the visit is part of Kim’s attempt to name him as successor.

The trip comes a month before Pyongyang is scheduled to host a delegates conference of the Workers’ Party, the first in 44 years, to name top government officials. Some analysts think the meeting will formally name Kim Jong-un as heir to the throne. Kim Jong-il, 68, is reportedly suffering from serious health problems.

An Chan-il, a renowned scholar in North Korean studies who himself defected from the North in 1979, said Kim Jong-il is seeking political backing from China for Jong-un’s succession and will make a “surprising proposal” in return.

“China has long urged North Korea to follow its open-door policy, which North Korea has refused,” said An, who heads the Seoul-based World Institute for North Korean Studies. “Kim will likely tell the Chinese leadership during this visit that the North is ready to change that stance if China supports the power succession to Kim Jong-un.”

Other analysts see a begging-bowl trip for Kim to request urgent economic aid to resolve the country’s food shortage, which has been worsened by recent floods. “It is like ‘Desperately seeking Kim Jong-il,’” said Choo Jae-woo, a Kyung Hee University professor, referencing the 1985 U.S. movie “Desperately Seeking Susan.”

Choo said Kim Jong-il is anxious to achieve some economic success to bolster his legitimacy at next month’s Workers’ Party meeting, which may be held Sept. 6-8. Chronic food shortages in the tightly controlled economy were worsened by a botched currency revaluation in November 2009.

When he visited China in May, Kim was reported to have requested $10 billion of investment in infrastructure funds and 1 million tons of food from Chinese premier Wen Jiabao.

The Tokyo Shimbun reported that Wen told Kim he hoped for economic reforms, which analysts describe as a de-facto demand for change in the North’s existing economic policies.

“Economic sanctions and the suspension of economic aid have further squeezed the North Korean economy,” said Choo. Seoul suspended most inter-Korean trade in the wake of the sinking of a South Korean naval vessel in March, which it blames on Pyongyang. The North denies it.