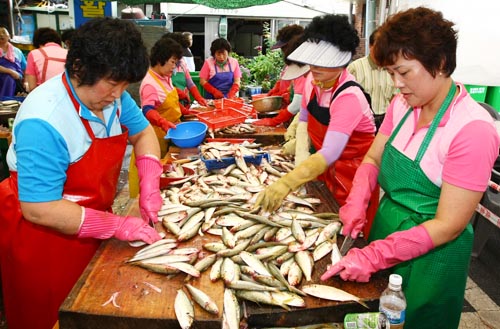 Salespeople at Myeongji Market in Busan prepare jeonuh, also known as gizzard shad, as part of the 10th Myeongji Jeonuh Festival. During the festival, fishmongers will demonstrate how to slice the fish to bring out its full flavor. See FESTIVALS, below. [YONHAP]

Sunday: Korea W Philharmonic Orchestra, conducted by Kim Nam-yun, will play medleys from “Miss Saigon” and “Chicago” while jazz vocalist Woongsan will sing various pieces, including “Quien Sera” and selections from “Les Miserables.” Jazz pianist Jin Bora will perform a rendition of Gershwin’s “Rhapsody in Blue” as well as her own composition “Storm of Desert.” Saxophonist Danny Jung will perform a piece from “Cinema Paradiso” and selections from “Evita” and “The Phantom of the Opera.”

Monday: This the first in a series of morning concerts that will be presented every second Thursday of the month at 11 a.m. Following Monday’s concert, the series will continue Oct. 14, Nov. 11 and Dec. 9, with additional dates through August 2011.

Sept. 18: It’s a rare opportunity to be able to listen to “Symphony No. 4” by Alexander Glazunov - considered the successor to Tchaikovsky. The Seoul Metropolitan Youth Orchestra will be conducted by Tae-young Park, a Russian music specialist, in this rendition of one of Glazunov’s famous works.

Open run: This play, originally written by Japanese playwright and screenwriter Koki Mitani, tells the story of a young playwright whose plays face government censorship. The play is based on Koki’s novel of the same name and was first staged in Japan in 1997. It was made into a movie in 2004 starring actors Yakusho Koji and Goro Inagaki.

The major theme of the play is the tension between censorship and an artist’s freedom of expression. Despite the seemingly serious topic, the play has a light, comic tone rather than a heavy political message.

The story begins with a young playwright, Hajime Tsubaki, during the 1940s after World War II.

The government sends him an order to delete all of the comic scenes in the play he is working on if he wants to see the play performed. As he rewrites it, he realizes that the play keeps getting better and better with the revisions.

The Korean version of University of Laughs will star film and television stars Ahn Suk-hwa and Jung Woong-in (“Last Scandal of My Life”).

Open run: Based on the popular serial comic “Gwangsu’s Thoughts,” this play focuses on Gwangsu, a little boy who sees the world in a curious way. Through his everyday experiences, Gwangsu begins to question everything from the mundane to the existential.

To Sept. 19: Four of Anton Chekhov’s classic plays, including “Ivanov” and “The Three Sisters,” get a modern twist in “4styles.” Up-and-coming writers, including Kim Jin-bok and Kim Suk-ju, from theater company Dong, are credited for this new version.

Performances start at 8 p.m. weekdays, 3 and 7 p.m. Saturdays and 3 p.m. Sundays. There are no performances on Mondays.

To Sept. 26: The play, referred to as a “comic, music drama,” was created by theater company Actors Band. The play tells the story of a young, psychologist, Kim Hee-jin, who questions the definition of sanity and insanity.

To Oct. 10: The original cast from Richard O’Brien’s original comedy musical “The Rocky Horror Show” is performing in Seoul until October. The cult classic has been performed on stage for millions of people around the world, made into a film and now, for the first time ever, the original cast is in Seoul.

Sept. 28: Take your favorite Led Zeppelin songs, the traditional Korean instrument gayageum and combine the two for an experience you are unlikely to get anywhere else.

Aside from putting a traditional Korean spin on “Stairway to Heaven,” the “Midday” program will also feature Korean art songs sung by Choe Sangho.

Get off at Dongkuk University Station, line No. 3, exit 2, then take the shuttle in front of Taegeukdang.

To Thursday: Yeongyang-gun hosts this festival to promote their pepper products, which are the basis of many kinds of Korean food. There will be kimchi-making competitions and performances of Korean traditional music by teams from Yeongyang.

To Thursday: Jeonuh, also known as gizzard shad, tastes the most delicious in the fall. Myeongji village in Busan is famous for its extensive variety of jeonuh, which attracts all types of epicures to the region. Fish dealers will also demonstrate how to cut raw jeonuh to bring out its full flavor.

From Seoul, take the KTX from Seoul Station to Busan Station.

Sept. 4 to 30: This festival, now in its 12th year, is one of the most comprehensive festivals for percussionists both amateur and professional. The lineup of foreign acts includes Funcussion from Japan, T.A.G. from France, artists from India’s Punjab Art Center and the Nueva Informacion del Grupo from Mexico. The list of Korean groups includes Jin-Suei Samulnori, Sound Box, Hata, Knock Percussion Ensemble, Hannulsori and Kim Hee-hyun & Ah U-reum.

This year’s guest country at KIAF is Britain, which has the world’s second-largest market for contemporary art. Fifteen galleries from Britain will have booths in the hall.

Sept. 10 to 12: This festival aims to highlight the best in the Korean cultural phenomenon known as the hallyu (Korean wave). There will be a fashion show on Sept. 11 featuring the work of renowned hanbok (traditional Korean dress) designer Lee Young-hee and worn by 15 of Korea’s best fashion models. On Sept. 12, Korean pop stars Super Junior, 2PM, Kara, 4minute, T-ara and more take the stage for a concert. The program also includes a parade and other events.

Admission prices vary according to event.

A free shuttle bus runs from Seoul to Gyeongju and departs from the Dongwha Duty Free Shop.

The design fair will feature an international competition, special exhibitions and design classes.

The Industrial Design Exhibition features the design work of more than 200 brands from 20 countries ranging from jewelry and furniture to exhibition displays.

A variety of events involving traditional instruments, costumes and masks will occur throughout the festival. There will also be plenty of opportunities for spectators to get involved in workshops and performances.

From Seoul take a bus to Andong, North Gyeongsang. The exhibition site is adjacent to the bus terminal.