U.S. blows by Iran, easing its way to a top seed

U.S. blows by Iran, easing its way to a top seed 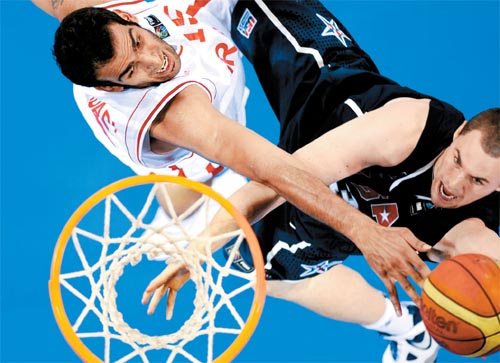 
ISTANBUL - The United States eased its way to a top seed in the knockout round of the World Basketball Championship, beating Iran 88-51 Wednesday in the first meeting between the countries with a history of contentious relations.

The U.S. team, which downplayed the political aspect of the matchup, methodically pulled away in the first half, wearing down the Asian champions with its depth and athleticism.

Kevin Love scored 13 points and Kevin Durant scored 12 for the Americans (4-0), who will meet the fourth-place team from Group A in the round of 16.

After playing his starters for most of the second half of a 70-68 victory over Brazil on Monday, U.S. coach Mike Krzyzewski went to the bench early in this one, with the Americans shooting 58 percent and scoring 23 points off turnovers in the victory.

The tensions between the nations’ governments provided the backdrop off the court, with a group of fans sitting near midcourt before the game holding U.S. and Iranian flags and a sign reading “PEACE” in between.

The only sparring on the floor was a playful bump between Haddadi and U.S. forward Rudy Gay, teammates with the NBA’s Memphis Grizzlies.

The countries have feuded for decades and their relations have deteriorated in recent years, with the United States supporting sanctions against Iran for continuing with programs it believes could be used to create nuclear weapons.

The U.S. team tried to keep the focus on the floor, with Krzyzewski saying he had played in Iran in the 1970s with an armed forces team and had great respect for the country.

“We are just here to play basketball,” Durant said Monday. “The political situation is something we cannot control. We have to go and just play the game of basketball.”

There’s no rivalry on the basketball court, where the nations had never met in Olympic or world championship play. The Iranian national team even came to Utah two years ago at the invitation of the NBA to play in a summer league as preparation for the 2008 Olympics.

Iranian fans, many waving flags and chanting, had enough to cheer early.

Haddadi won the opening tip, Durant fired a pass behind Andre Iguodala and out of bounds on the Americans’ first possession, and the U.S. lead was only six after one quarter.

But the Americans quickly pushed it into double digits in the second and gradually extended it to 14 at halftime. They opened the second half with another burst to push it past 20 and turn Group B’s second game of the night into a dull affair.

Following today’s game against winless Tunisia, the Americans will play Monday against an opponent still to be determined.

But a difficult quarterfinal could follow, with Spain looming as a possible opponent after two surprising losses have dropped the defending world champions into third place in their group.